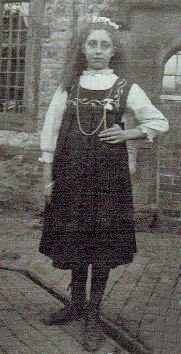 wife Polly. Beattie was their only daughter born after twelve years of marriage. William later became the publican at the Horse and Jockey (now the Old Mint) where Beattie is pictured as a child.

Beattie became a VAD along with former school pals when she was about 19 years old. We know that in 1916 she was friendly with William Sturley serving in Egypt with the Warwickshire Yeomanry for he mentions, in a postcard to his mother, that he has received from Beattie a ‘splendid parcel’.[1] Later in 1921 she married the former machine gun corps soldier – she was just 22 years old and he was 31 years old. He was at the time of his marriage a white-collar clerical worker, son of the Receiving Officer for Southam.

Beattie is recalled by her surviving children with fondest love and affection. They no longer live in Southam but came from some distances to see the VAD Exhibition Southam Women in World War I and spoke of their mother’s life. Pictured below at the Exhibition are Alan, Joyce and Elizabeth.