The Southam Heritage Collection consists of the original Cardall Collection, the Alan Griffin Photographic Archive and the much more recent Oral History Archive.

At the present time (end 2018) there are just over 6,000 indexed items in the Cardall Collection (of which only about 1,500 have a digital image), 3,800+ digitised and indexed 35mm negatives in the Alan Griffin Photographic Archive, 450 digitised glass plate negatives dating from Edwardian times,  a small digital archive of local Oral History recordings and over 3,500 local history newspaper cuttings and other items awaiting indexing and digitising.

The Cardall Collection was started by Jack Cardall back in the dark days of WW2. Jack was a local band master and coal merchant who had long dreamed of a career as a writer.

In the middle of the war with paper and other materials in short supply he sat down to write a series of local history pamphlets using his trusty typewriter and a Gestetner copying machine. This unlikely activity turned out to be very well received by local inhabitants and Jack was persuaded to continue his work. In addition local people started to bring to Jack their family items – stories, objects, records, pictures etc and asked him if he was interested in having the items. Following the war Jack lived at Beech-Hurst in Warwick Road where there was plenty of space to keep all sorts of items and so the Collection grew as they years passed.

Following Jack’s death in the 1970s his wife Irene, who had been a school teacher before her marriage, took over the care of the collection. She moved into the coach house adjacent to Beech-Hurst and she dedicated the ground floor of her new home to the Collection. 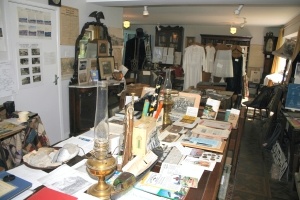 Layout of the Collection in Irene Cardall’s home at the time of her death.

Alan Griffin is a Southam person born and bred. He is well know as a local historian and although now living in Leamington Spa he retains his contacts with Southam and has contributed greatly to researching and publishing the history of the town. Not the least of Alan’s efforts is a unique book focussing on the men from Southam who gave their lives for their King and Country in the first world war. Alan’s book “Lest We Forget” pays tribute to these men, and is available from the Southam Heritage Collection.

Over many years Alan amassed a very large collection of photographic images relating to Southam and the surrounding area. This collection was taken with a 35mm camera and the films developed by Alan himself. In the years before digital photography, when one could not be sure the correct exposure had been made, the standard practice was to take multiple shots of a scene using different camera settings. Alan took, on average, 3 pictures of each scene and these were methodically filed in film books and catalogued in a series of exercise books, much like those used by school children of the time.

Alan decided to donate this archive to the Southam Heritage Collection and it had been digitised and indexed in an Excel database by several volunteers over a two year period so that any picture can now be easily searched for and immediately displayed on a computer screen. The scenes captured by Alan have already proved useful to people doing research into local industry and wanting records of their houses as well as providing much material for Exhibitions developed by the Southam Heritage Collection and for the annual “Old Southam Calendar” which provides a welcome revenue stream for the Collection. 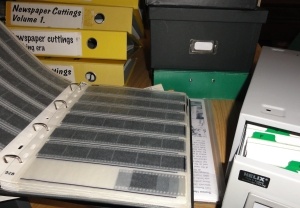 It wasn’t until after the death of Irene Cardall that the Friends of the Cardall Collection discovered several very heavy boxes in an upstairs room of her home, These boxes contained nearly 450 glass plate negatives probably taken by a member of the Cardall family back in Edwardian times. There is no information recorded about any photo – neither the persons in the photos nor the dates or locations. However it is possible to recognise some of the people and places portrayed in many of them, but some mysteries still remain.

Some of the plates are in very good condition and the photos show fascinating details about styles, fashions and the people of the time. Other pictures bear all the hallmarks of an amateur photographer struggling with the technology of the time and as such give a fascinating insight into life in Southam over 100 years ago. 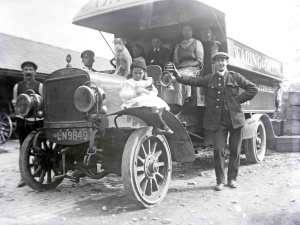 A print from one of the Edwardian glass plate negatives showing a family group posing in and around a Waring and Gillows truck.

One of the earliest objectives of the Friends of the Cardall Collection was to extend the Collection by recording the memories of some of the older residents of Southam in their own words and preserving these stories for posterity. Helen Morris, one of the Collection’s founding Committee members, aided and abetted by a small number of volunteers took on the task of running this project.

The result of this work is a unique collection of recordings captured digitally and transcribed into document form so that they are available for both listening to and reading.

When the WCC Library moved to its temporary location during the building of its replacement there was insufficient room for all its contents so the informal local history collection which consisted of many newspaper cuttings and other paper items were lent to the Heritage Collection so that they could be scanned and still available to local people whilst the actual items were stored in a remote location.

These items are largely unindexed but a digital copy of every item is available for research purposes. 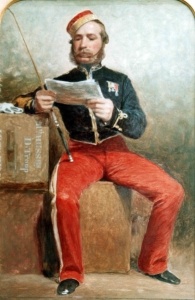 Seth Bond, survivor of the Charge of the Light Brigade, buried in Southam Church Yard