The “Tithes, Taxes and Old Southam Town” exhibition ran through the Summer of 2015 during the finishing stages of the new Tithe Place and Tithe Lodge developments in the town centre. The objective of the exhibition was to explain to local people the history of the town centre by focussing on some of its most significant buildings including some new archaeological finds which were made during the preparation of the site including the discovery of a large medieval barn which had previously been unknown. Other elements of the exhibition included items discovered by a variety of people both in Southam itself and the surrounding district. The short “Southam through the Ages” video which can be found elsewhere on this site was also part of this exhibition.

Click on the picture opposite to see the pictures and read all about the exhibition. 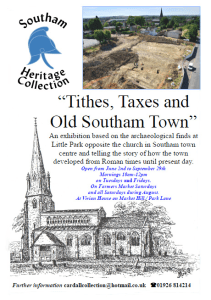