The Professional Nurses, usually called Sisters, were responsible for the medical care that the patients received. There was no resident doctor.  They would have used their most experienced VADs such as Isabel Tolley (whom have previously served at the Warneford in Leamington), and others such as Nurses Hillier,

Green and Sykes[1] whom they trained alongside themselves, to assist with dealing with the influx of patients when a new convoy arrived, and fulfil the regular duties of changing bandages, dressing wounds, applying treatments and supervising wards.

The Professional Nurses were also responsible for the work of the less experienced VADs as they made beds, washed and cleaned the patients and all the other countless jobs required of a nurse. Equally they ensured the supervision of the more menial ward jobs of cleaning, emptying slops, fetching water from the town pump and every other task concerned with the care and rehabilitation of wounded, mentally unwell or sick patients. They worked in conjunction with the Commandant who was responsible for the complex issues of administering a largely volunteer workforce. 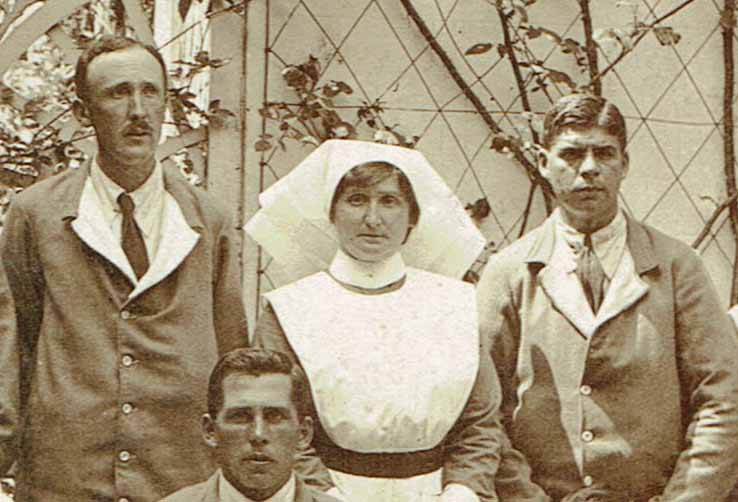 There were two Professional Nurses during most of the period the hospital was open: Sister B.M. Clipstone and Sister Elizabeth M. Roberts who are pictured here. They were joined for three weeks during September 1918 by Sister Charlotte Belsey; she may have provided leave relief.

The appearance of the Professional Nurses is distinctive. They each wore a dark coloured belt, a flowing headpiece, a large apron and long-sleeved dress with cuffs.

Their service record above is from the archive of the British Red Cross Society.

[1] Leamington Courier, April 1919. We have no other information about Nurses Green and Sykes.