After WW2, as life began to settle, Southam like many other parts of Britain, began to look towards the future and that future included building more houses, both Council and private, and providing new and better services.  This was also a period when many old and interesting properties were demolished and replaced with modern buildings, instead of being incorporated into new developments as they would be today.

In Southam this is when such roads as Stowe Drive were built, and as the population grew, so did the services.  Southam had a new fire station at the far end of town, the old Rectory by the church was demolished and a new library and police station with courthouse were built, Southam Secondary and Primary schools in Welsh Road West replaced the Victorian schools in School Street and Wood Street car park was developed. Until then there had only been parking on the roads and Market Hill, and this was clogging the roads up around the town centre as it was a main thoroughfare from the south to Coventry.

Click on the picture to see the Exhibition Posters. 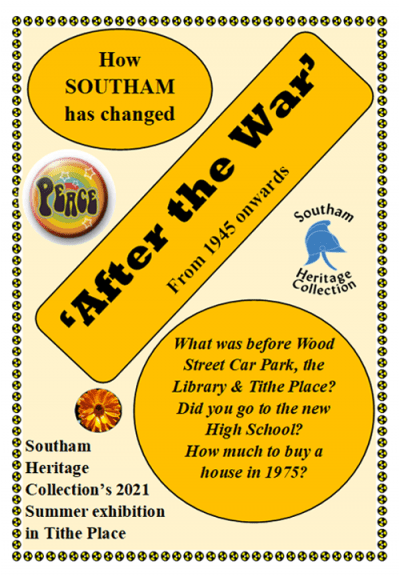