The Summer 2017 Exhibition focussed on some of the most important premises in Southam. These premises, the Inns and Public Houses, were important because they formed a focal point for much of the business and social activity within the town as well as catering for the needs of large numbers of the public who travelled through the town.

Southam was for much of its history a significant town in South Warwickshire because of its prime position on both the Welsh droving route for large quantities of livestock en route to the markets in London, and for the business people, officials, and the gentry on their north-south travels from London, Oxford and Banbury up to major towns in the midlands and north of the country. All these people needed somewhere to rest their weary bodies after what was in those times an exhausting day’s journey. Southam was well placed geographically to meet those needs and its business people were not slow to make use of the opportunity to conduct much business in the Inns and Public Houses.

Through much research Linda Doyle has discovered many fascinating facts about life in these premises, including every imaginable crime as well as numerous more legitimate goings on.

Click on the picture opposite to see some of the stories around these premises and the artefacts used in them.

A leaflet detailing 20 of the Inns and Public Houses that once existed in Southam was produced as part of this exhibition (thanks to a grant from Tesco’s ‘Bags of Help’ scheme) giving brief details of each building together with a map showing their location and a photo of each one. Copies of this leaflet are available from the collection price £1.50 (p&p included). 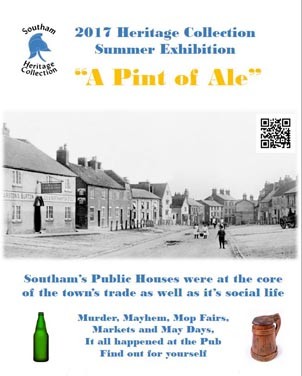