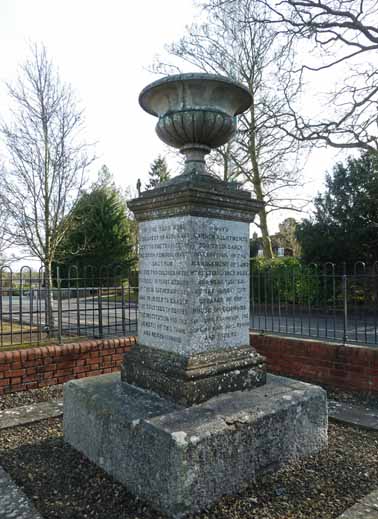 The 13th April this year marks the 200th anniversary of a meeting held at the Craven Arms Inn that established Southam’s Eye and Ear Infirmary in Warwick Road.  In the days before the NHS, all medical treatment had to be paid for, and this Infirmary in Southam was the first of its kind dedicated to providing free treatment for the rural working poor.  It was the brainchild of Henry Lilley Smith, surgeon and Southam resident, who built the hospital on land adjoining his home.

Mr Lilley Smith was born to a minor landowning family in Southam in 1787. He trained at Guy’s Hospital and gained his MRCS diploma in 1810 after serving as an assistant surgeon in the army.  He was one of the original members of the “Provincial and Medical Surgical Association” – now known as the BMA.  During his time in London he was influenced by the work of John Cunningham Saunders, the founder of Moorfields Eye Hospital.  As Southam’s appointed surgeon, he recognised the need for maintaining the health and dignity of working people, and he wrote several publications on the medical care of the poor.  He was particularly concerned that poor people could not afford appropriate treatment for eye and ear ailments.  As a result their ability to work, and their general health deteriorated, with the consequence that they became dependent on the Parish.

The Infirmary he established had about 14 beds, and was supported by voluntary donations from local benefactors, by subscriptions and small contributions.  Whilst patients received free treatment and medicines, they had to pay for their food at a daily rate of 10d (old pence) for a man, 8d for a woman and 6d for a child. The Eye and Ear Infirmary treated about 100 in-patients and 250 out-patients per year, and in its first forty years is said to have cured over 12,000 people.

Five years after founding the infirmary, Lilley Smith went on to establish the country’s first ‘Provident Dispensary’ close to the Infirmary in Warwick Road (see picture).  His idea was to create a self-supporting medical service, whereby labourers would pay a weekly subscription (one penny for a single person and 2d for a family) and receive free consultations, treatments and medicines.  The Southam dispensary opened in 1823 and was followed by similar facilities in Leicester, Atherstone, Coventry, Derby, Lymington and Northampton.  Unfortunately, such charitable services were not always welcomed by medical practitioners, as having a detrimental effect on their earnings.

Henry Lilley Smith died in 1859.  His Eye and Ear Infirmary continued to flourish until 1872 when it was closed because of financial difficulties.  The building is now known as Warwick House (formerly The Stoneythorpe Hotel).  His provident dispensary cottage was demolished in 1868, but a stone urn now stands on an inscribed plinth by the roadside near to where it once stood. The urn was erected in 1889 and commemorates the many benevolent works of this pioneering Southam gentleman, who some may argue deserves greater recognition.

Please see our website www.southamheritage.org for details of our location, exhibitions and current opening times. Contact: 01926 613503 email southamheritage@hotmail.com  and find us on Facebook: Southam Heritage Collection.