When I went to the Coronation

When King George VI died in 1952, there followed a year’s preparation for Queen Elizabeth II’s Coronation on June 2nd 1953.  I went into London with friends to see the coronation.  We went to Oxford Street wearing strong shoes, raincoats and carrying umbrellas – it drizzled all day.  We were in Oxford Street by 9.30 am, taking sandwiches and flasks of coffee.

By midday the road was packed and lining the route was the RAF, and helmeted and caped policemen.  People had come from all over Britain as well as from abroad, and many carried periscopes to view the procession.  Flags were everywhere.

At the moment of the Coronation there was a 4 gun salute in St James Park and a 62 gun salute from the Tower of London.  Meanwhile the procession was forming up on the return route, with the Queen towards the end.  At 2.50pm, with Ladies carrying her train, she left the west door of the Abbey and was settled into the state coach.

Just before 3pm the first bands were coming from Marble Arch direction to loud cheers.  There were the marching bands of the Household Cavalry with their glittering helmets and plumes, followed by contingents from the old colonies and the Commonwealth – thousands of them with their bands – Aussies with their bush hats, New Zealanders, Indians with their turbans, Gurkhas, African Mounties on black horses, and all the British Forces and Marines, each with their bands.

There were open carriages, despite the weather, with Sultans and Rajahs from places like Lahore and Zanzibar, the Queen Salote of Tonga was very becoming even in the rain, while the Sultan of Kelantan (Malaysia) looked wet and miserable!  There were Commonwealth Prime Ministers, and Winston Churchill with Clementine in his Admiral’s uniform, which brought great cheers. 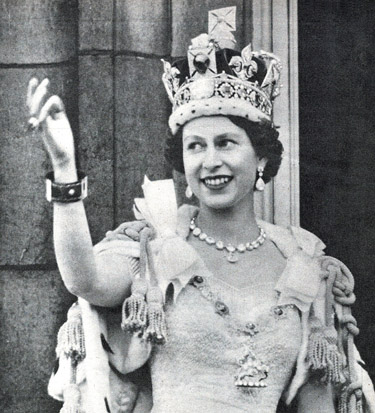 When the state coach came in sight, the cheers were deafening and flag waving frantic.  There were eight white horses in pairs, with a postillion riding on one of each pair, with grooms walking alongside, coachmen and footmen all in Royal livery, with mounted escort round each coach, the Duke of Beaufort, Viscount Alanbrooke, the Duke of Gloucester and Earl Mountbatten amongst them.

The Queen’s coach was ornately carved and golden.  As it came nearer, one could almost hear the gasp from the crowd before their deafening cheers. The Queen sat on the right side of the coach, the Duke of Edinburgh on her left.  She was not waving or smiling, but looking straight in front, with the glittering crown on her head, Orb in her right hand and Sceptre in her left.  She was a young woman of 26 years old, and in her Coronation robes, wearing the crown, she was incredibly beautiful and from the look on her face, she was still inside the Abbey making solemn vows.  It was one of the most striking things I’ve ever seen.

After the procession passed, we went home for dry clothes, a drink and sandwich, but at 6.30pm we went back to Buckingham palace.  The crowd was singing ‘We want the Queen’, jumping up and down, creating surges, so we held arms.  Eventually she came out to deafening cheers.  At about 9.30pm we went home, had a hot bath, and fell into bed!

Southam Heritage Collection is located in the atrium of Tithe Place opposite the Library entrance.  We are open on Tuesday, Thursday, Friday and Saturday mornings from 10am to 12 noon. www.southamheritage.org   01926 613503   southamheritage@hotmail.com  Follow us on Facebook.