The Harp Inn and Brickyard

“The tone of The Harp is strong and clear.  Likewise, so is this Harp’s beer.”  That is what was written on the sign of The Harp Inn, during its final days of the early 20th Century.  The Harp Inn was a lonely place with an adjacent brickyard and a couple of cottages, situated on the Banbury Road, about halfway between Southam and Ladbroke.  Today it is approximately where the new HS2 railway line will cross the A423 on the road to Banbury.

It was said in the early coaching days, that if the coachman sounded the post horn as they passed The Harp Inn, the ostlers and stable boys could hear it at the Craven Arms on Market Hill.  They would then be ready to change the coach’s horses as soon as it arrived.

The earliest brickyard record is from about 1837, when it first came into use.  William Taft’s family were builders who lived in Coventry Street, Southam, and owned the Inn and the brickyard.  William King was the brick maker and no doubt supplied Taft, the builder.  Another well-known local name, Mark Sturley, arrived from Kenilworth to brew beer and manage The Harp Inn, whilst his sons worked as brick makers and masons.

As well as being on the Coventry Toll Road, The Harp was on a busy drover’s route to the London and local markets, including the big monthly Monday Market in Southam.  Sadly, when the new railway bypassed Southam in 1849, it not only took away the coach traffic, but the passing farmers and drovers, and Southam’s livestock markets slowly fell away. 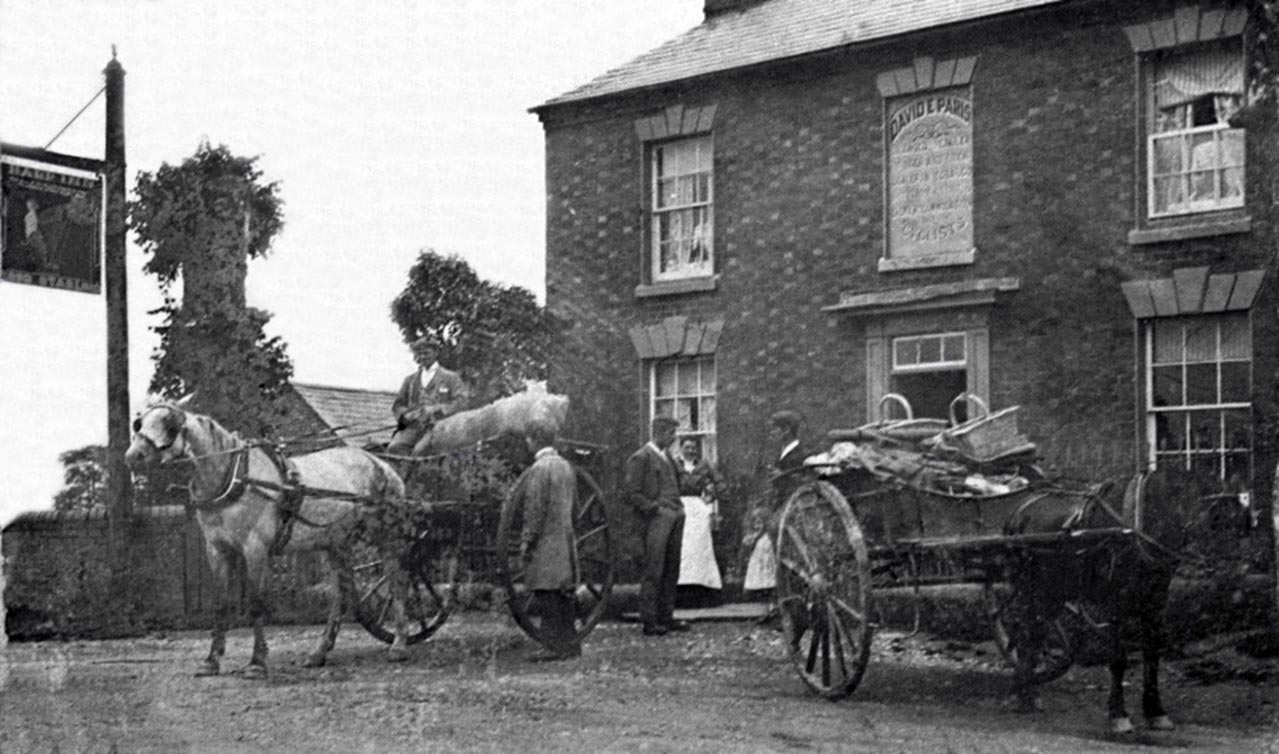 By 1851 Thomas Sturley, who took over The Harp from his father, had become an agent for the Great Western Railway.  Until the railway was built, the only way to Deppers Bridge was via Ladbroke, past The Harp Inn.  However, when they built the new Station Road from Southam to Deppers Bridge, The Harp was bypassed, so Thomas Sturley moved from The Harp Inn to the Great Western Hotel at Harbury Station and a new publican took over running The Harp.

In 1855, William Taft put The Harp and brickyard on the market for sale.  Clearly it was no longer such a profitable property to own.  It was advertised as a substantially built property with newly erected outbuildings, a brickyard, a cottage and eleven acres of good pasture and arable, suitable as a going investment for the right person.

The Inn had a parlour, kitchen/tap room, bar room, pantry, cellar and five good bedrooms, as well as a large brewhouse with room above, and baking oven.  Outbuildings included stables with a loft and a blacksmith’s shop, a large brick built barn with cattle and cart hovels attached, a walled yard and pig-sties.  The property had enough land and fishponds to make a useful living.  The brickyard had two acres, a large kiln and two long drying hovels, with a labourer’s cottage and garden for growing vegetables and flowers.

It looks as though it was bought by a Peter Harris, who owned Holt Farm and no doubt other properties.  In 1861, Peter Harris Snr was a successful metal broker employing 280 men, and lived on the High Street at Kingswinford, Brierley Hill.  His son, Peter Harris Jnr was a Fire Brick manager, which would fit with his father owning a brick yard.  Another son was a carrier and merchant.  From 1903 the publican was David Parish, who along with his wife Florence managed the Inn and a farm, but passing trade was slowly falling off.

The property remained with Harris Jnr until he died in 1910 and his executors were still dealing with it in 1915 when David Parish left and it became a casualty of the Great War.  The licence was refused and referred for compensation as redundant, along with several other local public houses.  The Harp Inn became a private farmhouse thereafter.  The property is still standing at the time of writing (August 2021), but is now owned by HS2 Ltd, who have already demolished the rest of the buildings.

The photograph shows David Parish, his wife Florence and daughter Beatrice outside The Harp Inn, probably circa 1906.  If you are interested in finding out more about local history, please see our website www.southamheritage.org or visit the museum in the centre of Southam. We are located in the atrium of Tithe Place opposite the Library entrance and are currently open on Tuesday, Thursday, Friday and Saturday mornings from 10am to 12 noon. Telephone 01926 613503 email  southamheritage@hotmail.com  and see our Facebook page: Southam Heritage Collection.