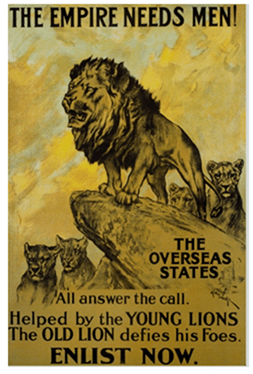 The story of the Bull family of Daventry Street is a complex, courageous and tragic one. Sadly in 1903 Ada Bull, died and her husband George, a baker, was left with four youngsters to bring up:  Ida (15), Nellie (13), George (10) and John (8). George senior took the bold step of moving the whole family to Canada.

The family sailed from Liverpool to Quebec in 1904. Conditions were squalid. Third class passengers were packed into a narrow space with tiny bunks on both sides of long corridor-like cabins. For a three-week journey there was no privacy and a dreadful stench. It was advantageous to be at the top bunk for if there was sea-sickness, sleeping on the bottom bunk meant being in the line of ‘fire’.

They settled in Canada and the children all prospered. Ida became a nurse at the Royal Victoria Hospital, Ontario. Nellie married Frank Flower, her cousin from Bascote Locks who went out to Canada in 1911.  The boys grew to be tall, healthy, sturdy lads – George was a labourer and John an electrician. When war broke out both men enlisted with the Canadian Expeditionary force and tragically, both perished.

Private John Bull was killed near Dickenbush on the Western Front on 10th April 1916 within a few hours of his battalion moving up to the front line trenches at ‘The Buff’.  He is buried at Chester Farm Cemetery near Ypres.

His older brother survived longer. George came to England on leave in September 1915 when perhaps he visited his relatives in Southam. He received a shell wound in the shoulder in 1916 and was taken to hospital in Wimereux and still had ‘septic formentations’ when he reached hospital in Folkestone. (Before antibiotics septicaemia was often a killer disease). On discharge, after a month of physical training he was back in the front. During the next year he received a ‘good conduct medal’ twice, was promoted to Sergeant, and received the Military Medal, a high distinction, in October 1917.

George Bull was in the thick of the action on 8th August 1918 when he was killed in the Battle of Amiens. Casualties were high: as the official diary states ‘Many gallant acts were performed by all ranks in the face of extremely severe machine gun fire’. He is buried at Caix Cemetery on the Somme.

One other of the Bull family volunteered. Nurse Ida Bull, together with 3,000 nurses of the Canadian Army Medical Corp, served in France returning to Canada on a troop ship in 1919.

Details of the Bull family, along with life histories of many others from Southam, are in the WWI Centenary Archive at Southam Heritage Collection and now available on line (go to www.southamheritage.org find the ‘Southam History’ tab then click on ‘WW1 Centenary Archive’). Our aim is to commemorate ‘those who died and all who served’. Many Southam people have shared family stories and we are still finding more.  If you can help us with more information please get in touch.