I’ve got some more barrels for you

CARDALL’S CORNER – August 2017 – By Alan Griffin A tale of attempted murder on the way from Wormleighton to Southam Walking the turnpike road towards Fenny Compton on a hot August morning in 1848, James Read pondered some remarks addressed to him months earlier following a case at Southam Magistrates’ Court.  The phrase ‘Somebody should pay dear for this’ had stuck in his memory.  Read was the Southam Division sergeant in the Knightlow Hundred Police Force and in his satchel was an Arrest Warrant for the man who had uttered this veiled threat, one Daniel Davenport.  Davenport was a 27 year old ostler at the Bull Inn, Southam and was in breach of an Affiliation Order of one-and-sixpence a week for the child of Ann Gibbons. Southam Inspector Smallbones had instructed his sergeant to execute the warrant at a Wormleighton address.  Sgt Read found Davenport driving a team of his uncle’s horses near the village and he was shown the warrant and arrested.  With Read’s consent the prisoner was accompanied to his uncle’s house where the horses were stabled and both men took some refreshment.  Davenport then said that he would like to call at his father’s house to change his shirt.  While at the house, Sgt Read observed Davenport take something out of a box and put it into his pocket. In the early evening the two men set off along the towpath of the Oxford canal towards Southam.  As they walked, Davenport mentioned an incident in which Read’s life had been threatened by a man named Newbold who had waved a loaded gun at him – ‘He didn’t shoot you then’ said Davenport to which Sgt Read replied ‘No’ at which Davenport said ‘Then I will’ and producing a six-barrelled revolver, shot policeman Read in the head at point- blank range. As Read lay on the towpath pleading for his life, Davenport held the revolver to Read’s temple saying ‘I’ve got some more barrels for you’.  By sheer good fortune, at that moment a canal boat came into view and Davenport took flight.  John Falkner the boatman raised the alarm and the officer was taken up and conveyed to Southam in a trap. Sgt James Read was found to have a pistol ball lodged in his neck beneath his jaw bone and was subsequently attended by several surgeons.  Handbills carrying Davenport’s description were widely circulated but it wasn’t until December 1849 that he was apprehended by Inspector Smallbones at Bishops Castle in Shropshire.  At Warwick Assizes in March 1850 he was convicted of grievous bodily harm and resisting arrest.  The judge sentenced him to transportation for life and on 30 April 1852 he was one of 212 convicts put on board the ship William Jardine on a one-way journey – destination Australia.  The police officer lived for two years with the ball still embedded in his neck but died at home in Coventry Street, Southam on 25 September 1854 aged 47.  Somewhat ironically, the Registrar who issued his Death Certificate was William Taylor who, as a magistrate, had also signed the warrant that Sergeant Read was carrying on the day he was gunned down. The photograph is an early image of cottages in Wormleighton village. For more details about Southam Heritage Collection, please see our Facebook page and our website www.southamheritage.org You can contact us by emailing southamheritage@hotmail.com or by telephoning Bernard on 01926 613503 or Linda on 01926 814214. 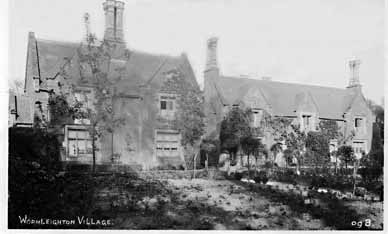