Many English fairs have their origins in Medieval times during the reign of King Henry III. The Benedictine monks of Coventry Priory were granted a market charter for their Southam manor in 1227. They subsequently received grants for  fairs on St Peter and St Paul’s Day (June 28), St George’s Day (April 23) and on the Feast of St Leger (October 2).

Medieval fairs were generally much bigger events than a weekly market and could last for several days or even a full week. Many of the merchants who attended these fairs spent their lives travelling from one fair to another on horseback or pulling a handcart. The wares on offer would include things such as spices, silk and metal goods not normally available at the weekly market. The fairs attracted entertainers of all descriptions from fire-eaters to sword swallowers and acrobats to rope walkers and many of them made a living travelling between fairs. There would be singers and players of musical instruments and sometimes performing animals, the most popular of which were the poor unfortunate ‘dancing’ bears.

By the 19th century we find local newspapers reporting in some detail on Southam fairs. Over time the trading aspect had been superseded by entertainment. In 1826 a printed poster for Southam Annual Fair makes clear that the two-day event was based largely on the Annual Fair held in Coventry and was essentially a street fair. Costumed characters representing Lady Godiva, Peeping Tom and Bishop Blaize took part along with St George in full armour slaying the dragon.

In the early 1830’s Surgeon Henry Lilley Smith arrived in Southam and had set up his Provident Dispensary in Warwick Road. An advertisement in the Coventry Herald in June 1839 informs readers that the Southam Dispensary Spring Holiday would be held in a field adjoining Henry Smith’s house. Smith was not only an enlightened physician but a great philanthropist. The holiday was organised by him and was open free to Dispensary members and to visitors on payment of a shilling (5p). A permanent maypole was erected on the sloping field next to the brook and marquees were set up. Male members of the Dispensary were served bread and meat and a pint of ale with bread and butter and cakes for the women and children. The church bells were rung and two bands played for dancing. The day’s entertainment concluded with the singing of Rule Britannia and the National Anthem.

A street procession on May Day was a regular fixture in the Southam calendar in the early 1900`s but it had died out by the end of the Great War. Following the Second World War, the Southam Workers Union continued the tradition of a celebration at Whitsuntide with a fete and sports on the recreation ground and when the new Spring Bank Holiday was introduced in 1970 local folk were quick to arrange a Carnival on that date which continues to the present day, thankfully with not a dancing bear in sight.

The photographs: a pencil drawing from circa 1840 by Sarah Day showing the original maypole near the River Stowe in Warwick Road.  A painting of King Henry III who granted the various Southam charters. 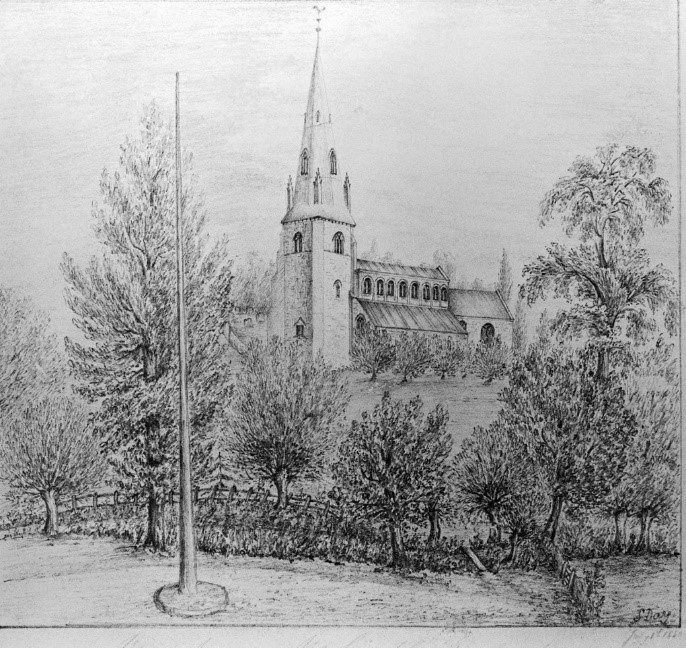