A Pair of Old Boots

This month’s article was written by the late Rene Cardall when she was given three items for the Museum which once belonged to one of Southam’s best known personalities – Bill Stephens.  All the items she mentions are now part of Southam Heritage Collection.  The article is a reminder of how simple artefacts can hold powerful meanings and memories within them. 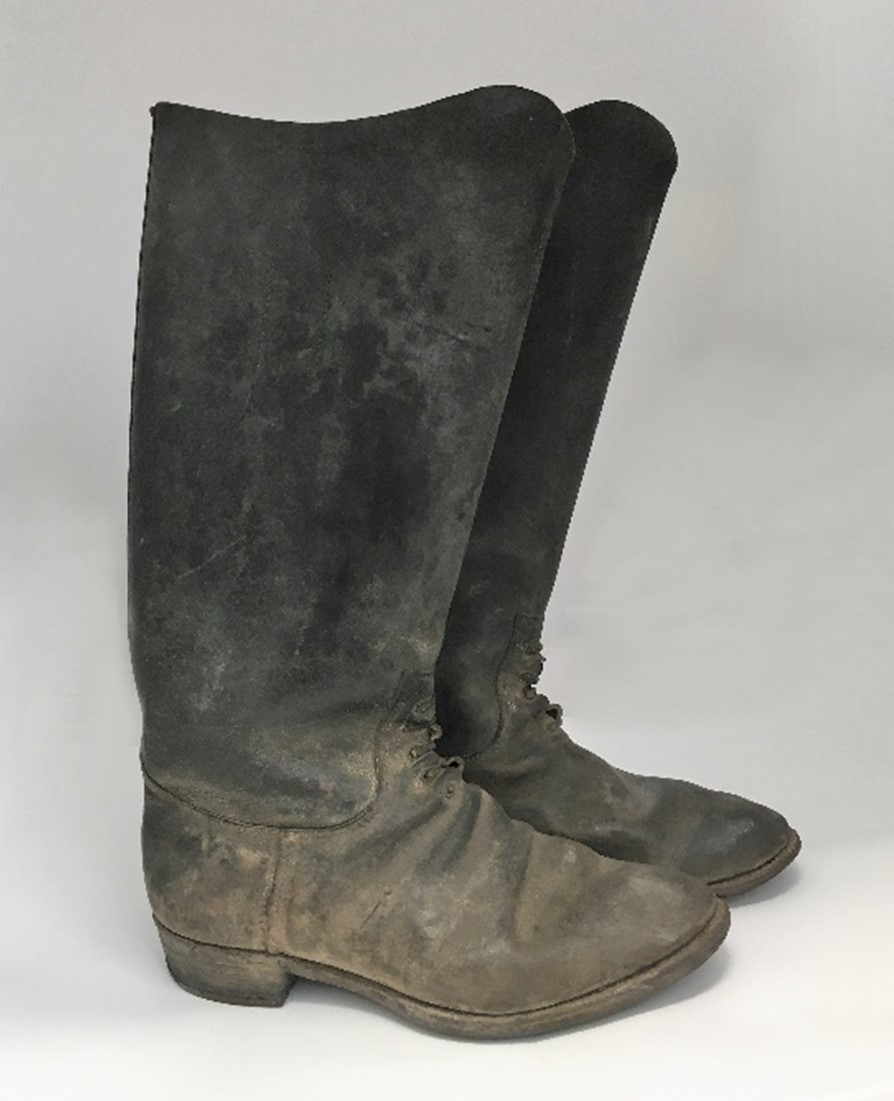 I have recently been given a pair of old boots and a pair of old shoes for the museum, but they are not any old boots and shoes. They once belonged to Bill Stephens, for many years the only men’s barbers in Southam, with his shop on the Market Hill.

The boots are regulation Army issue and were worn by Bill Stephens when he was called up for service in the Royal Warwickshire Regiment in the First World War. They have well-worn studs on the soles and iron rims round the heels. No doubt they marched many a mile and were smothered in the mud of the trenches. If boots could speak, they would tell an eloquent tale.

The shoes are of a special kind, having very elongated toes (about six inches longer than normal) and flat, wooden soles. They are stage shoes of the kind once worn by “stand-up” comedians to do tap dances to accompany their comic songs. Bill was a very accomplished amateur comedian and was a star of local concerts, the only source of entertainment in the days when radio was a novelty and television had not been invented. Concerts were organised with local townspeople performing, and usually took place in the meeting rooms of local pubs or in the Court House. They were greatly enjoyed social occasions.

Generations of men and boys went to Bill Stephens, and later his daughter Maude, for their haircuts and shaves. One source of entertainment while they waited their turn was a framed collection of 36 WW1 postcards (also now in the Museum) showing sketches of Army life, in training and in the trenches in France. One shows a parade ground where a soldier’s puttees (long strips of cloth wound round the lower leg) have come undone and are trailing behind him. The caption says, “They made so much fuss about it, I was afraid I was going to be shot at dawn”.

Another shows a lonely soldier walking on slatted boards across the mud of a scarred battlefield. The caption says, “We marched into the trenches late in the evening, going across fields on duckboards. There was nothing to be seen but shell holes and wintry looking trees”.

Two more show the soldier in a rest period away from “The Front”. In one he is walking along a street of ruined houses, saying, “Isn’t it nice to get into a town once more?” In the other, he is pictured inside a barn, lying on a huge pile of straw with only his feet, in their big boots, visible. The caption reads, “A comfortable bed at last”. These cards must have brought back poignant memories to contemporary ex-soldiers, and given later generations a salutary reminder of what the “Tommies” endured.

Southam Heritage Collection is located in the atrium of Tithe Place opposite the Library entrance.  We are open on Tuesday, Thursday, Friday and Saturday mornings from 10am to 12 noon. To find out more about Southam’s history, visit our website www.southamheritage.org  telephone 01926 613503 or email  southamheritage@hotmail.com  You can also follow us on Facebook..