The Rotary Club of Southam

A dinner and inaugural meeting of The Rotary Club of Southam took place at the Craven Arms Hotel, Market Hill, on 16th February 1971.  It was attended by 31 potential members. In those days only one representative of each profession was allowed in a club, and amongst the names on the list of members, these are familiar to me:

The club formally came into being at the Presentation of the Charter at the Leofric Hotel, Coventry on Wednesday 16th June 1971. Four of the initial 31 had fallen by the wayside so there were 27 Founder members with Haydn Jenkins being elected President; Bertie Lucas, Vice-President; Peter Taylor, Secretary and Ray Beddoes, Treasurer.

In Rotary each club is sponsored by an existing club – known as the mother club – and in the case of the Rotary Club of Southam it was the Rotary Club of Kenilworth. Also in attendance at the Charter meeting were Rotarians from Rugby, Leamington Spa, Warwick and Coventry all of whom presented artefacts to the new club. Meetings of the new club were held on Tuesday lunchtimes, initially at the Craven Arms, then the Stoneythorpe Hotel (now Warwick House) before moving to the Fox & Hen at Bascote Heath.

Fast forward to 1994 and the Rotary Club of Southam was sponsoring its own daughter club. Recognising that times were changing and many could not make a lunchtime meeting, the Rotary Club of Southam 2000 was formed to meet on Thursday evenings at 2000 hrs – hence the name. The driving force behind this was the Rev Peter Jackson, Rector of Napton, who had joined the Rotary Club of Southam in 1973. Peter had been instrumental in the start of the ‘Tree of Light’ (see below).  He was also a keen supporter of the Rotary International campaign “End Polio Now” started in 1985 when the number of polio cases was over 1,000 per day spread across 125 countries, paralysing and even killing children. Today, the number of cases is down by 99.9%, and is only present in a few countries. A tragic loss to the club in 2014 was the death of Peter at the age of 80 following a traffic accident when driving home from a club meeting.

Since Christmas 2005, the people of Southam and the surrounding villages have donated in excess of £34,000 to the Rotary Club of Southam’s Tree of Light appeal with the tree being lit as part of the town’s Christmas Lights celebrations. All of the money raised goes directly to Acorns Children’s Hospice, with all expenses having been covered by the club and the sponsorship of Southam Carpets, Dywidag Southam and MCI Electrical Installations.

Many other fundraising events have been held over the years including an annual Whist Drive, started by Cyril Watts in 1973 and carried on by Bill Davies. Teams from the surrounding villages competed for a cup which, after Cyril’s death, was renamed the Cyril Watts Cup in his honour.

In 1990 Jean Foster became not only the first lady to join the Rotary Club of Southam but the first female Rotarian in District 1060 which covers the whole of the West Midlands. Jean’s husband, Roger, had been a Southam Rotarian from 1978 to his untimely death in 1983. In 1992 Jean was appointed Secretary of the club and in 1993 Treasurer, positions she held until the club closed.

Over the past 50 years many friendships have been forged and money raised for charities both local and international. Sadly, the membership of twelve at the beginning of 2021 became seven by the middle of the year as members resigned, mainly for health reasons, so it was reluctantly decided to close the club.

The Rotary Club of Southam held its final meeting in December 2021, just over 50 years since its formation. The final Charter Lunch, attended by members, friends and Rotarians from other clubs, was held in November 2021, making a memorable end to the club’s distinguished history. 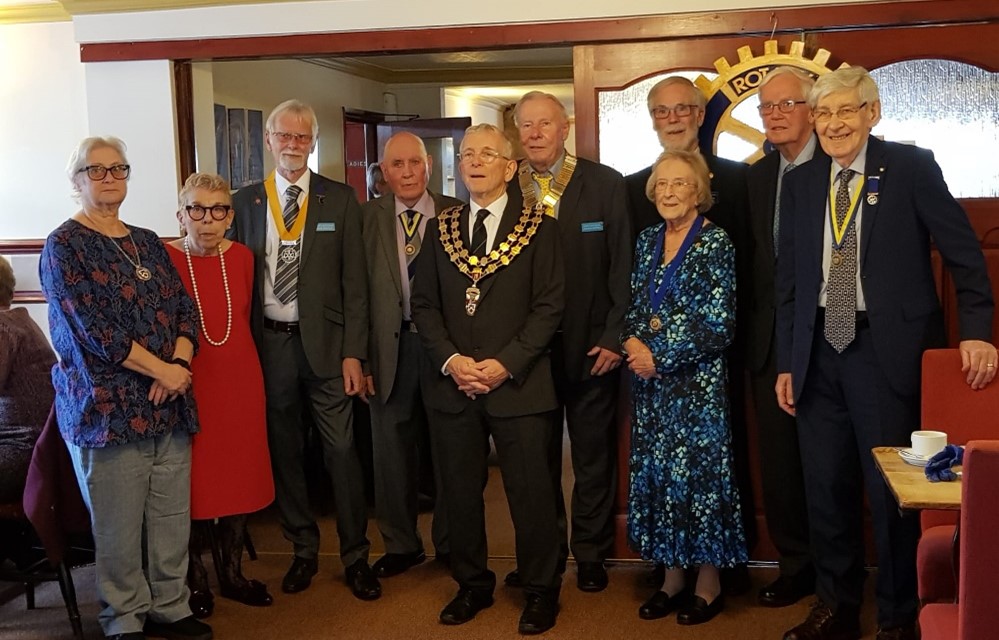 The photograph shows six of the final Rotarians with the Mayor and Mayoress of Southam, plus two former Southam Rotarians.