Many Christmas traditions are relatively recent but one old favourite, the Pantomime, remains a delightful Christmas entertainment enjoyed by all the family.  Pantomime has its roots in 16th century Italy and can be traced back to the Roman ‘Saturnalia’ midwinter festival when everything was turned upside down, and men dressed as women and women as men.

Pantomime should not be confused with the religious ‘Mystery Plays’, which are based on Bible stories, and acted throughout the year.  They are recorded as early as 1392 in Coventry, when the Drapers Guild was in possession of a pageant-house.  There was once a Drapery building beside St James’ Church, so with Southam’s close connection to Coventry Priory, one could imagine the Mystery Plays were probably also performed here.

There were also the ‘Mummers’ folk plays performed by the men of the town, who went from house to house during the twelve days of Christmas.  The Warwickshire Mummers are well remembered for their play “St George and the Turkish Knight”.  This was a battle of good versus evil with a sword fight, and fell just behind Lady Godiva in terms of local popularity.  The Turkish Knight is vanquished and St George restored to life, and performed at the Winter Solstice, the play celebrates the rebirth of light and regeneration of nature.

Before everyone could read and write, plays were one of the best ways to educate and entertain people.  What better way to convey a message, than to provide a visual story with a moral conclusion.  Before the 18th century, travelling theatres visited Southam and professional actors presented a range of drama, comedy and music. Southam was part of Chamberlain’s Cotswold Circuit, with Robert Chamberlain and his son Henry based at Cheltenham.  In 1829 Henry Chamberlain became the manager of the Royal Leamington Spa Theatre.

In the summer of 1822, Chamberlain’s theatre troupe played Warwick Theatre for three months and then moved on to Southam to open on November 20th with “Rob Roy”, newly brought from London’s Covent Garden Theatre, (or so a poster in the Collection tells us!).  The ten actors all lodged in the town over Christmas.  The posters and tickets for the Southam plays were printed by Francis Smith on the High Street and the plays were performed at the town’s New Theatre, a building constructed at the back of the Craven Arms Inn on Market Hill.  Each performance started with the first play at 6.45 pm, then a second sitting with another play at 8.30 pm, with a short farce, dance or songs in between.  Amongst the plays performed that year were Shakespeare’s “Romeo and Juliet” and “Macbeth”. 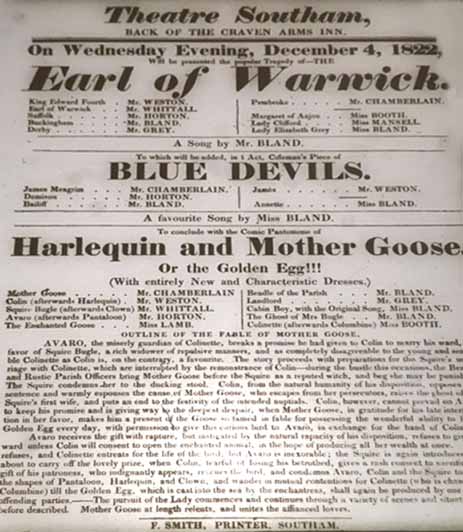 An interesting mixture of dramatic entertainment was seen in Southam on Wednesday 4th December 1822.  The opening performance was “the popular Tragedy of The Earl of Warwick”, followed by a one act play “Blue Devils” and then “The Comic Pantomime of Harlequin and Mother Goose, or The Golden Egg”, with the poster including an outline of the Mother Goose fable.  On the Monday before Christmas the play was “Forty Thieves”.  The December 16th evening presented “Peeping Tom of Coventry” when Miss Mansell played Lady Godiva.  Miss Mansell, along with her brother, were the children of a famous London actress.

Boxing Day featured the tragedy “Fazio”, an Italian wife’s revenge, along with the ghostly story “Spectre Bridegroom”.  The final evening on Monday December 30th concluded with “Christmas Gambols” which the poster says included the tailor’s head being cut off and sewn back on again, with whimsical transformations of three old women.

We hope you enjoy your own Christmas entertainments, and look forward to seeing you visiting our exhibition room in Tithe Place, where you can buy tickets for our Christmas Raffle.  The draw will take place in the museum on Thursday 23rd December at 11am.  We also sell Christmas cards from paintings by local artists, and a range of local history books, which would make excellent gifts for anyone with an interest in Southam’s history.

We are located in the atrium of Tithe Place opposite the Library entrance and are open on Tuesday, Thursday, Friday and Saturday mornings from 10am to 12 noon. Telephone 01926 613503 email  southamheritage@hotmail.com  and find us on Facebook.