My father John Brunt was born at Bubbenhall, the youngest of 10 children. He moved to Southam with his wife Alma and young family in 1960, where he lived for the rest of his life.

When he left school at the age of 14, Britain had been at war with Germany for four years, and he was assigned to work at the Whitley Aircraft factory, Coventry. Having been raised in a rural community where most work was outside, he hated factory work.  He became ill, and after a short time was allowed to leave, finding work on a farm in Bubbenhall. Here he was much happier, being responsible for looking after the farm’s bull, milking, feeding livestock, hedging and ditching, and taking cart horses to the Blacksmith.  At the age of 16 as the war ended, he went to work at Stoneleigh Deer Park, dismantling wooden crates: the wood to be used for repairing houses damaged by the bombing of Coventry.

In 1947, immediately after his 18th birthday, John was ordered to present himself at Budbroke Barracks, Warwick.  Although the War had ended, National Service had not, and men had to serve in the forces for at least two years.  John chose the Army, and was assigned to the RASC (Royal Army Service Corps).  After 6 weeks basic training at Budbroke, he was sent to Yeovil to train as a driver, after which he was shipped abroad.  None of the recruits knew where they were going and after much speculation, and the climate getting warmer, they arrived in Egypt. 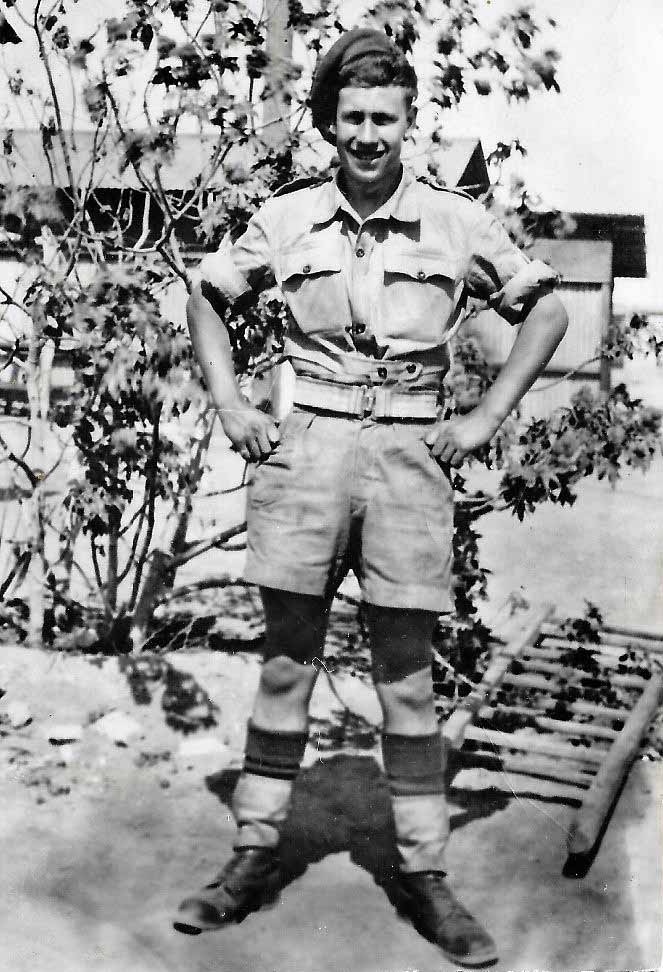 The ongoing conflict between Arabs and Israelis was being policed by British forces. Young men were thrust into a war-torn country amidst bombing, shooting and violence, trying to keep the peace, with both sides unhappy having British soldiers amongst them.  John had many adventures in Egypt, and made good friends.  He was fascinated by the different culture, and particularly enjoyed working alongside the Arab Legion.  He occasionally spoke about it in later life and would come out with strange Arabic phrases, such as ‘imshi walla’ the polite translation of which is ‘out of the way, man’- useful for a lorry driver.

He was assigned as chauffeur to the army’s Arabic / English interpreter, and, wearing plain clothes, had to drive him to places where British soldiers were not allowed to go.  He was fed by the Arab Legion and was amazed at how their food was cooked and served – not a bit like at home, or by the British Army!  One of his most important jobs was fetching water for the camp, driving over miles of empty sand, on his own. One day he gave a lift to an old Arab man and his goat. His passenger didn’t say a word, just nodded a thank you when he got off the truck. His saddest experience was when driving in convoy, seeing one of his friends killed at a roadside ambush.  John was detailed to take the body to the nearest hospital at Benghazi.  When he eventually got back to camp, his Captain, with sympathy and understanding, told John that he must not leave the barracks for a week.

I have my father’s Army memorabilia box, and the stories its contents evoke are both moving and astonishing – his Army pay book and Identity Certificate, a list of the clothes he was issued with, his training records (including paper targets with bullet holes,) vaccination certificates, Transport Details ordering him to report to the Arab Legion and pick up ‘Guards’, and a well-used map of the Convoy Routes across Palestine. We have some tiny black & white photos of him swimming in the Suez Canal and at Wadi El Kuf, posing with his mates in ‘civvies’, and in front of the lorry he drove.

After two years’ service, he was shipped home from Tobruk in September 1949 on the Humphrey Gale troopship.  He was still only 20 years old.  Those two years of National Service had been life-changing.  He had travelled widely within a war-torn region, visited Jerusalem, Bethlehem, and the ruins at Cyrenaica. He had learnt how to survive where diesel was more plentiful than water, and had experienced death and conflict, all within a totally different culture.

That was not the end of his National Service.  Because of his experience in Palestine, he was called up as a Class Z Reservist in 1951, and received orders to report to Burrowhead Camp, Wigtownshire, Scotland on 8th July 1951 – his new wife’s 20th birthday. However, after a fortnight at Burrowhead, he was released and was never called upon to serve again.

If you have stories to tell about National Service – either your own or your relatives, do please get in touch to add them to our post-WW2 archive.  To get involved with local history, please see our website www.southamheritage.org or visit the museum in the centre of Southam. We are located in the atrium of Tithe Place and open from 10am to 12 noon on Tuesdays, Thursdays, Fridays and Saturdays. Telephone 01926 613503 email  southamheritage@hotmail.com  and see our Facebook page.