I was born at No.4 Mountfield Gardens, which is a row of two-bedroomed terraced cottages set back between Daventry Street and Pendicke Street.  I was told I was born not only in the same bedroom that my Great Grandmother Martha Duckett had died in during the 1918 influenza epidemic, but also in the same bed that she had passed away in!  Albeit in the 22 years that had passed; the bed clothes had been changed.  But that’s local history for you.

My parents, William and Evelyn Griffin started their married life living at No.4 with my Great Aunt Lucy Duckett.  My Grandfather Ralph Griffin had died in WW1 and my Grandmother Mabel, Aunt Lucy’s sister, married George Powell after the war and they lived at No.1 Mountfield Gardens.

Great Grandad William Duckett died in 1931 age 82, before I was born. In his later years, while he lived at No.4, I was told he would take a walk down the entry from Mountfield Gardens and spend hours looking along Daventry Street, where he could see the comings and goings for Southam.  This was where he saw the first car to come to Southam, which belonged to Dr Lattey’s son who lived at “Hammerfest”, the house in Wood Street that was demolished to make way for the car park in 1972.

It was this car that in later years at “Hammerfest” I found the rotting remains of the body, but unfortunately with no mechanical parts, so restoration was not possible.   Called a Sabella, they were made from 1906 – 1914, with a 10 hp JAP engine and belt drive.

The maker’s plate on the rotten body stated 33, Southampton Street, Strand, with the number 113 on the plate which might indicate it was the thirteenth Sabella made – a common stratagem.  The National Motor Museum gave me some information, but their address was from a 1912 issue of the Motor Cycle magazine as 110, Albany Street.  They further informed me that as far as they knew no Sabella car is left in existence.

The car as I found it was about 96 inches (244 mm) long and 28 inches (71 mm) wide.  It was a two seater, with the passenger sitting in front of the driver.  The chassis was wooden and looked very like a large early perambulator.  Had it been in better condition I would have considered restoring it, but sadly this was not possible.

More information about the Sabella has been found in a copy of the Bexhill on Sea Observer, June 1911, when journalist Mr Stirling was allowed to drive one from London to Bexhill.  He described it as a ‘luxurious cheap little run-about’, weighing only 4 cwt and without a clutch or gearbox.   It was well sprung and rode easily over the rough roads, providing a comfortable two hour drive and doing 50 miles to the gallon.

He further described it as of smart appearance, being low built and long, with the seats in tandem and the driver behind, and all protected by a cape hood.  The air- cooled engine was driven by two V shaped belts on expanding pulleys, one each side to each wheel.  In the absence of a clutch, a lever slackened the belt drive between the engine pulleys and rear wheels, which when taken up, the car glided forward. 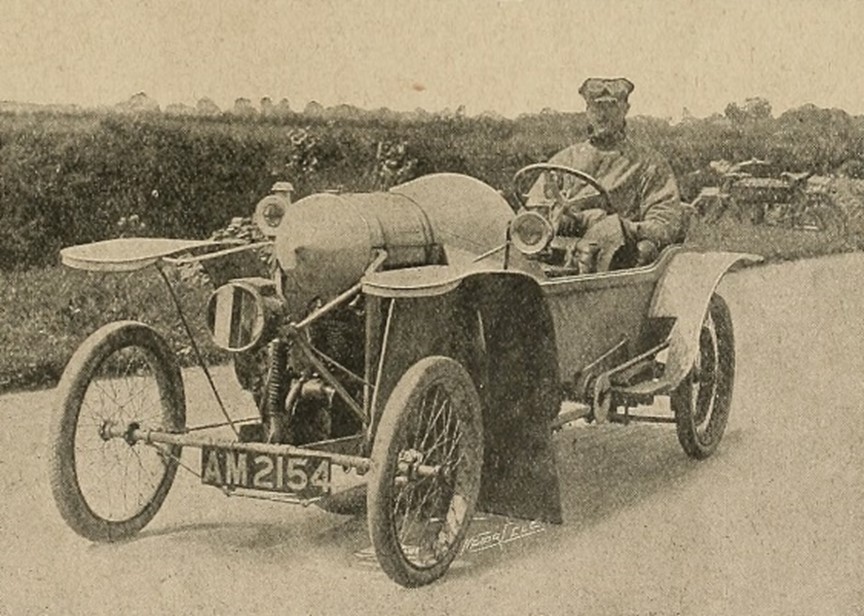 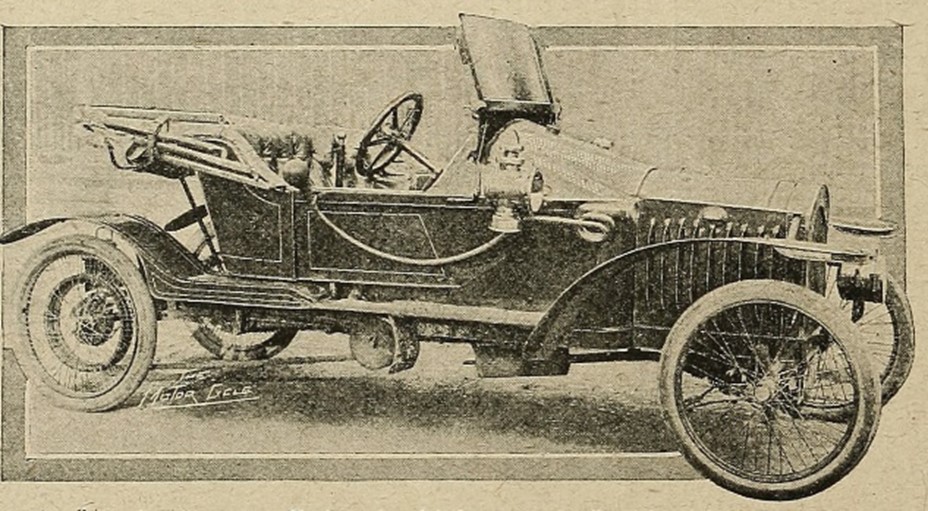 Our Summer Exhibition in Tithe Place atrium is now open, and is titled ‘After the War’. The exhibition is open on Thursday, Friday and Saturday mornings from 10am to 12 noon. It features changes in Southam that took place in the post-World War 2 era.  If you are interested in finding out more about local history, contact Southam Heritage Collection.  Please see our website for where to find us and our current opening times. Contact: 01926 613503 email southamheritage@hotmail.com  visit our website www.southamheritage.org and find us on Facebook: Southam Heritage Collection.