More than ever before, this past year has made us appreciate the contribution that health care workers make to the wellbeing of the population.  However, the nursing profession itself has a very chequered history.  It originated from women acquiring and passing on their skills through experience, together with their knowledge of herbs and folklore.  It was also once associated with the church – hence a remnant of religion in the nursing title of “Sister”.

By Florence Nightingale’s time (1850’s), nursing was slowly becoming a respected profession.  By the end of the 19th Century, state registration examinations were in place to provide qualifications, and this eventually evolved into the present day professional nursing system.  Middle and upper-class ladies found that organising voluntary nursing associations was a way of contributing to the community and of taking themselves out of their mainly domestic environment.  Southam once had its own Nursing Association, membership of which entitled you to nursing care.

However, the popular portrayal of a District Nurse was often far from reality – the hours were long and the work was hard.  Prior to the nurse starting her rounds at 9 am, she was available for people to call on her at her home from 8 am.  After her day’s visits, hopefully she would be home by eight in the evening; Saturday was usually a working day and Sundays were rarely completely free of visits.  Unless she was provided with a pony or perhaps a donkey cart, it was a long walk between visits to surrounding villages, until in later years bicycles were provided.  In 1926, it cost 12 shillings and sixpence for Nurse Humphries’ bicycle repairs.  Her annual lodgings and other expenses cost £2 : 3s : 0d, and her salary for the year was £129 : 8s : 6d.  Alongside the routine school health checks, thrown into the nursing equation was midwifery and health emergencies, and coping with travel in Winter weather. 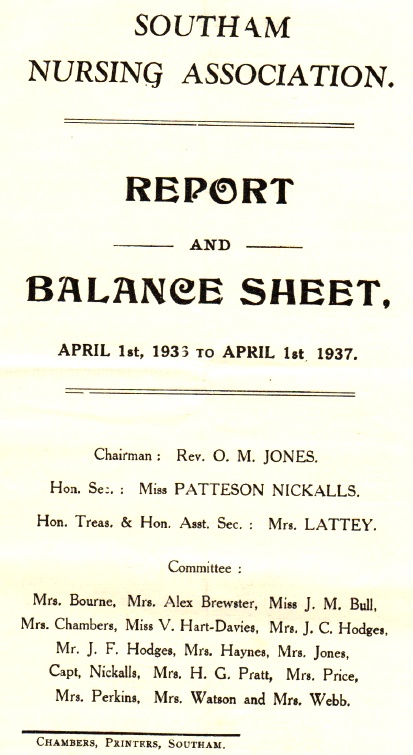 It is not surprising that in 1924 there was no Southam nurse employed.  At the annual meeting of the Southam Nursing Association, Chairman of Southam Rural District Council, Mr A Hodges, called for a public meeting and said that Southam should continue to employ a qualified nurse because they owed it to the older residents and the working classes who could not afford to pay up to a week’s wage for a nurse to visit.

Today we regard our free health care as ‘normal’, but before the NHS things were very different.  Membership of the Southam Nursing Association cost a minimum of 8d (old pence) a month paid in advance, with three months’ notice for maternity cases.  The rules included that the nurse, when visiting, was not to do any cooking or household chores and was not to provide any food.  Only those patients in receipt of Parish Relief or Old Age Pensions could have SNA services free of charge.

Nurses frequently changed.  During 1927 Nurse Lovell averaged 10 visits a day. Although most were general illnesses, it included nearly 400 midwifery and maternity visits.   In 1927 the SNA voluntary positions were held by the wife of Dr Lattey from Wood Street as Treasurer, the Reverend Jones as Chairman, and Miss Ethel Patteson Nickalls as Secretary.  Miss Nickalls and her brother Morris, (a Justice of the Peace,) had come to live at The Fields in Station Road (near the present day Rugby Club) from Kent, after their American father had died in 1910.  She was still the Honorary Secretary in 1943.

The photograph is the title page of the Southam Nursing Association’s annual report for the year ending 1st April 1937, printed by Chambers Printers of Southam, a copy of which is part of Southam Heritage Collection.  The list of Committee members includes many ‘old Southam’ names that some of our readers may recognise:

If you are interested in finding out more about local history, please see our website www.southamheritage.org or visit the museum during opening hours in the centre of Southam. We are located in the atrium of Tithe Place opposite the Library entrance. Telephone 01926 613503 email  southamheritage@hotmail.com  and follow our Facebook page: Southam Heritage Collection.