Bringing in the New Year

Our 21st Century New Year entertainment is vastly different to how earlier generations once celebrated the New Year.  Without television or internet, it used to be a good old sing-song that kept the January blues away.  I’m sure a Concert evening organised in 1938 by the Women’s Institute would have gone down very well at New Year.  I don’t recognise the songs mentioned, or know how good the voices were of those who provided the entertainment, so a little bit of imagination is perhaps required:

Held at the Assembly Rooms* in Southam, the Misses Hayes, Huggard, Tomlinson and Berry opened the evening with a chorus dance, followed by Miss Davies singing ‘Slave Song’ and Miss Amor’s Dutch song and dance, then Miss Stephens’ humorous song ‘The Fairy Told Me’, followed by a further chorus dance of ‘Oh Jemima’ and Mr Lewer (a car mechanic on Market Hill) and his ‘dancers’ performed ‘The Geisha’.  Miss Cardall gave a monologue ‘My Day at the Races’, Mrs Jones sang ‘Sing Joyous Bird’ and after some national dancing, the evening was rounded off with ‘The Second Minuet’.

A little more familiar, and in another pre-war year, was when Jack Cardall and his Band provided the music at the Assembly Rooms for 150 ticket holders at a ‘Non-Stop Dance’.  The highlight of the evening was the winner of the “Heads and Tails” dance won by Mr Bourne and his partner. This is where imagination is useful – I wonder what a “Heads and Tails” dance was?

I’m not sure if nearly two hundred years later, we would be as enthusiastic about welcoming in the New Year as they did at Warwick in 1829.  The Reverend Bowen of the High Street Chapel followed the annual custom of a preached sermon on New Year’s Day, when the delivered address, (according to the Warwickshire Advertiser,) drew the ‘attendance of a crowded congregation’! 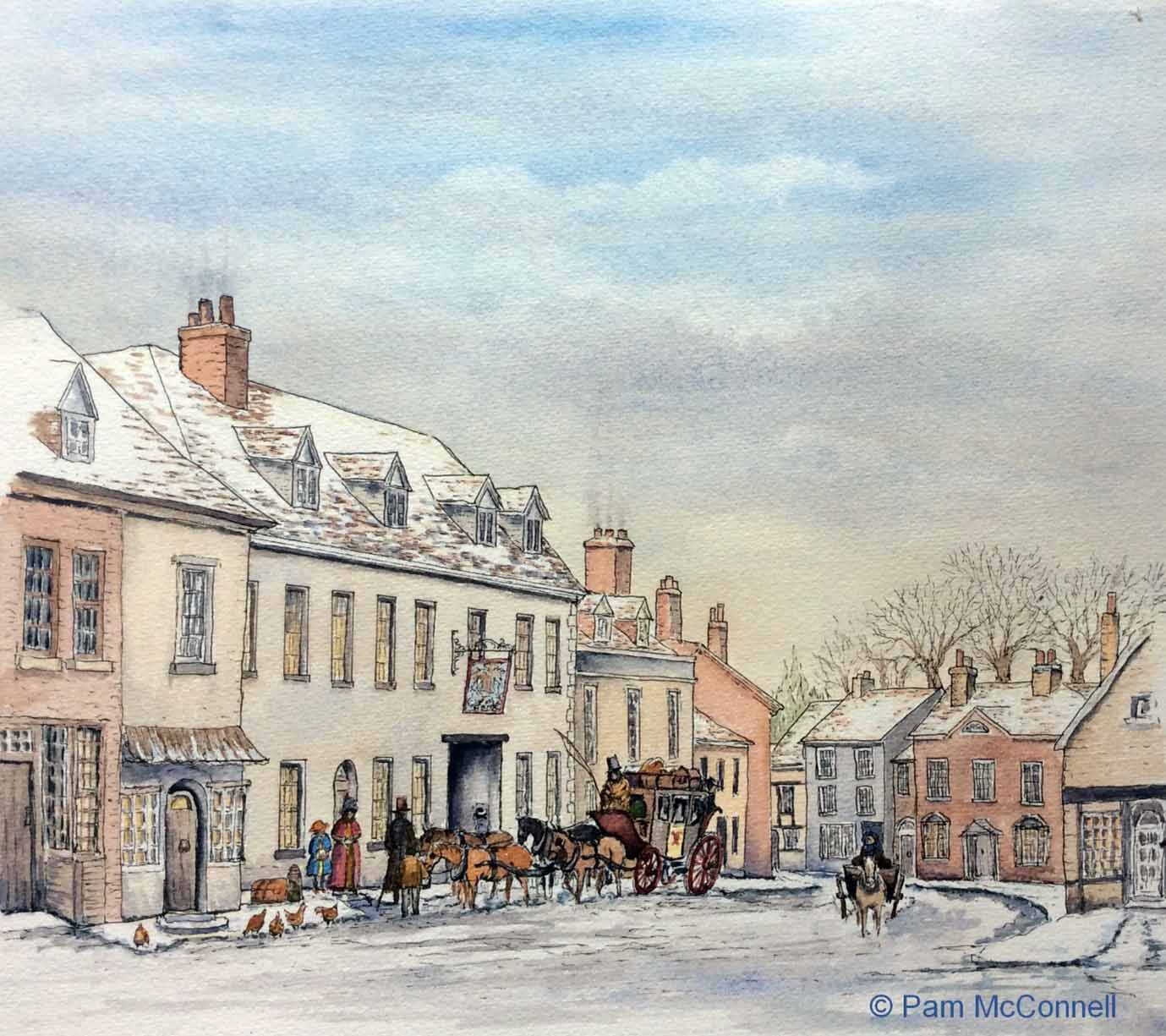 The New Year of 1836 in Southam appears to have been far more exciting for the children, if not for their parents, because of a large fall of snow.  The Birmingham to London mail coaches were blocked in at Southam and the coaches and passengers were all obliged to stay the night here.  For two days the London papers did not get as far as Southam on their way to Warwick and Birmingham, because forty five miles of snowbound roads beyond Oxford remained impassable.  With no email or telephones, the mail was so important that it was transported from Southam onward to Birmingham by horseback.  Several dedicated messengers rode through six foot drifts of snow across the fields to reach their destinations.

As for the children, they were being publicly admonished in the Warwickshire Advertiser as ‘mischievous urchins’ for sliding on the ice in the roads and footways of the towns and villages, making walking more dangerous.  It was suggested that people would be doing a good public service by ‘administering the Cane-laws on the shoulders of the mischief makers’.

We wish all our readers a very Happy New Year and look forward to providing you with a brand new Cardall’s Corner every month.  You can find previous articles on our website under the tab ‘Southam History’ and a selection of earlier articles is now available to buy in booklet form.  If you have any interesting Southam stories or memories that you think would make a good Cardall’s Corner, then please do get in touch.

* The Assembly Rooms were a two storey building at the rear of what is now Warwick House (formerly The Stoneythorpe Hotel).  Before becoming part of the Hotel, they were used as Southam’s ‘village hall’ hosting wedding receptions, a youth club, plays, and weekly dances.  There was a stage, and the dance floor was reputed to be one of the best in the County.

The photograph is a local artist’s impression of The Craven Arms coaching Inn on Market Hill in the early 19th Century © Pam McConnell.  The painting is available to buy exclusively from us as a greetings card or as a print.  If you are interested in finding out more about local history, please see our website www.southamheritage.org or visit the museum in the centre of Southam. We are located in the atrium of Tithe Place opposite the Library entrance. Telephone 01926 613503 email  southamheritage@hotmail.com  and see our Facebook page: Southam Heritage Collection.