Did the Romans Visit Southam ?

Despite one of the major Roman roads in Britain, the Fosse Way, being so close to Southam, very little evidence has been found to show that the Romans actually visited Southam itself. However, during the building of Tithe Lodge in 2012/2013, the archaeological investigations that preceded the building work uncovered the most important evidence of Roman occupation ever discovered in the area.

This evidence came in the form of ditches that probably formed boundaries between fields. Ditches by themselves are not terribly exciting items and unless other objects can be extracted from them, they tend to attract little attention. However, alongside pottery shards, one of the items discovered near to the ditches was a Roman coin. This item is in a different category altogether, because coins can convey quite a lot of information. 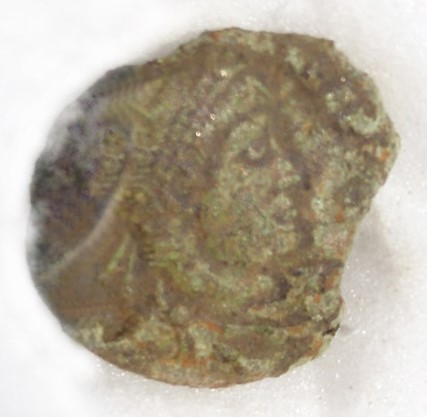 The coin discovered is shown in the photograph.  It is from the reign of the Roman Emperor Constans who, along with his brothers, had been raised to the rank of Caesar by his father, Emperor Constantine the Great on 25th December 333CE.  We normally think of Roman Emperors as being battle-hardened soldiers, but Constans was only about 17 when he became Emperor.  On the death of his father he and his two brothers divided the Roman Empire between them (hence there were three Emperors at that time) and they proceeded to kill off other potential claimants. So it appears that the Emperor Constans was not a very pleasant character, and he and his brothers eventually fell out because of disputes over their allotted lands and their chosen branches of religion.

Constans reigned from 337 to 350CE and in 343CE he came to Britain.  The exact reason for his visit is not known.  He came in the winter, when crossing the Channel was not easy, and it has been surmised that he may have come to suppress a rebellion of the Picts and Scots. No-one really knows for sure.

Needless to say Constans was not averse to violence and he had a reputation for being vicious and indulging in scandalous behaviour.  His reign came to an abrupt end in 350CE when, having alienated his legions, he was usurped by one of his generals and was forced to flee for his life and try to reach Spain. Eventually he sought sanctuary in a Temple in the eastern Pyrenees, but having virtually no supporters outside his immediate circle he was cornered and killed at the young age of 30.

This coin found in Southam indicates there were Romans in the Southam area, quite probably living here, at around the end of the 4th century. The last half of the 4th century was a period of significant turmoil in Roman Britain as battle raged between the Romans and various tribes of Britons. The Romans had some success in putting down these rebellions but by the end of the century other parts of the Empire were in revolt and in 410CE the Romans eventually told Britain to look after itself and left for good!

Maybe the Romans were in the Southam area for quite some time, time enough to set up a system of fields with boundaries. Maybe it was one of these ‘farmers’ who lost this coin just outside Little Park (off Park Lane).  Maybe it was dropped by a soldier marching through on his way to the encampment at Chesterton. We’ll never know for certain but at least we do have a lot more evidence from the coin, the ditches and the pottery shards found just east of Little Park that Southam was somewhere worth visiting in the Roman era.

If you are interested in finding out more about local history, please see our website www.southamheritage.org or visit the museum (when open) in Tithe Place, High Street.  Please also have a look at our displays in both the atrium and the High Street facing window of Tithe Place.  Telephone us on 01926 613503 email  southamheritage@hotmail.com  and find us on Facebook: Southam Heritage Collection.