Mop or Hiring Fairs started when, in 1351, Edward III passed the Statute of Labourers to regulate the labour market after the Black Death had resulted in dire shortages of labourers. They were held in the Autumn on or near Michaelmas Day in bustling Market Towns which had many nearby villages to attract both employers and employees. Michaelmas Day used to be September 29th but moved to October 10th when England adopted the Gregorian Calendar in 1752.

In 1563 the Statute of Apprentices stipulated a certain day on which Shire High Constables proclaimed the rates of pay and conditions of employment for the coming year.

At the Fair the workers held implements of their trade. For instance, dairy maids held milking stools, shepherds a crook or tuft of wool and a housemaid a broom or mop. When the hire agreement was settled the new employer handed over one shilling to secure the deal. Once hired for the next 12 months the workers removed the sign of their trade and wore bright ribbons to denote they had been hired. They then went off to spend their shillings on the stalls at the fair.

Some towns had Runaway Mops which took place a week later for those hirers and labourers who changed their minds over the hirings of the previous week.

Local historian Jack Cardall (1899 – 1976) once wrote this about Mop Fairs: “before the first World War they were always held on three successive Mondays in October, with the middle one held on the first Monday after the 11th being the largest and the third known as the ’draggle-tail’ the smaller (sic) of the three. A servant who lived in a house the whole twelve months round gained a settlement in the parish in which the house was situated. In order to prevent this the masters dismissed their servants a few days before the twelve months was up and hired either new ones or old ones over again if they liked them. When the law was changed the reason for turning servants adrift at Michaelmas no longer existed and the practice gradually came to an end. A few of the older inhabitants who were still alive up to a few years ago could still remember these Hiring fairs at which the various servants wore or carried an emblem of their trade.

The men workers wore smocks and the design of the smocking also depicted the trade of the wearer. I myself remember when I was a very small boy seeing various workers in their long smocks of calico or similar material on their way to work. Although the custom of the hiring fair died out all the fun of the fair continued with the usual amusements, stalls and sideshows. One of the most popular of these was the annual ox roast, on the Market Hill or alternately in the Craven Yard. In 1914 owing to the outbreak of war there was no ox roast but rather than let the custom die out completely my father Mr Jonathan Cardall, then provided a pig to roast.

Although revived again between the two wars there was some doubt during the Munich crisis in 1938 whether it would be held, but it took place as usual, and on that occasion the ox cost £17 16s 0d. The first slice was auctioned, making £20 15s which was sent to the Warneford Hospital. Revived once again after the second world war it was found more and more that rising prices made it uneconomic as a fund raising effort for charity and for the past few years the custom has been discontinued. The Mop however has retained its popularity and despite the heavy traffic through the town it is very pleasing to see that the old tradition of having at least some of the attractions on the Market Hill and other main streets in the town is still maintained.”

Southam’s Mop Fair is still held every October in the town centre, but is now a traditional fun fair with fairground rides, stalls and side shows, a hog roast, hot dogs, candy floss and toffee apples. 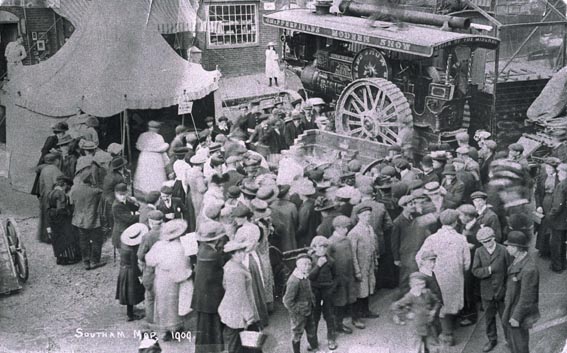 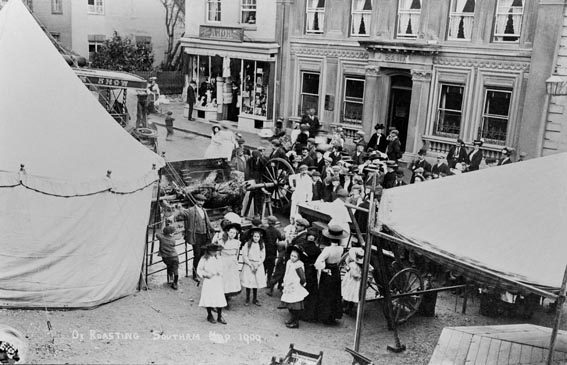 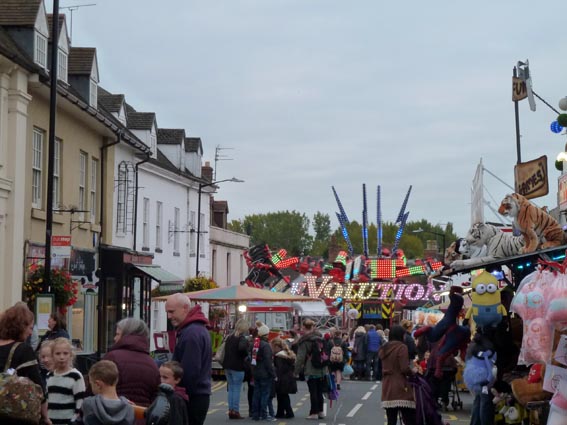 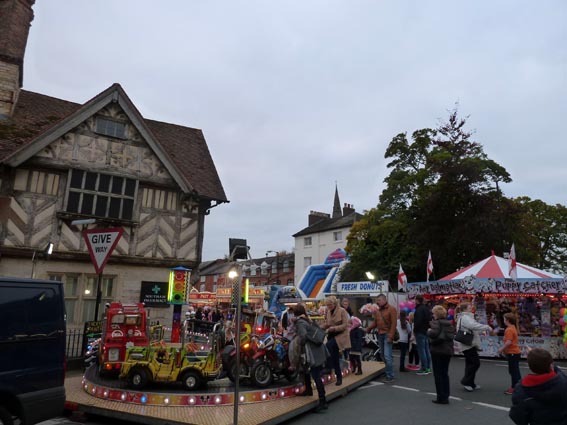