CARDALL’S CORNER – September 2017 – By Linda Doyle Last year was the 140th anniversary of Ladbroke village school being built which corresponds with the Victorian requirement to make education something that all parents were obliged to provide for their children. Whatever their standing in life education was now compulsory, plus it had to be paid for! This was not exactly welcomed as it took away a wage, however small, or a babysitter while both parents worked. It was not until after the turn of the 20th century that most children were being sent to school on a regular basis. Villages surrounding Southam built small, single class-roomed schools, where all the pupils of mixed age learnt together. Indeed at Ladbroke until the 1970s when it closed, the bottom class of infants still ranged from the babies of 4 years old up to 8 years old. The older children in a class were expected to help with the younger ones. In the Victorian period, attendance was generally worst amongst the older girls who stayed home to “mind the baby” and boys were absent during July for haymaking, August and September for harvest, and October for blackberrying and potato picking! Then there were cowslips, dandelions, violets and coltsfoot amongst other plants to pick each year, providing an added income for the family. Indeed, in the 1880s when it cost 6d (old pence) to send a child to school each week, every penny found was essential. The money from picking cowslips could clothe one child for the best part of a year. Hence when these new schools first opened, the children who had worked at home, in the fields or been allowed to run wild while parents worked, were loath to be shut in rooms learning to read and write. In 1883 the Ladbroke school log book says “Hodgkin still absent this third week. He is employed by Mr Smeeton to frighten the rooks from the beans.” In 1899 the school log says: “Some boys went to Warwick Stock Sale, were driving cattle – could not be legally employed.” Holidays corresponded to the farming year. In 1889 the school log book says: Dec 24th: “Half day holiday and tea in the school” Dec 25th: “Holiday” Dec 26th: “Attendance good.” In the early years there were no school dinners, but from the middle 20th century meals were delivered in containers in a van to the village schools from a central kitchen in Pendicke Street. This was where the clinic now is, and also where the children from the Southam boys and girls schools in School Street and the Convent school went for their dinners. Physical punishment was rare, but teachers were strict. However in the 1940s when they moved on to the Southam School, the boy’s headmaster Mr Linley certainly used the cane. One local gentleman well remembers the deputy-headmaster, because if a boy couldn’t answer a question he would knock on the boy’s head and ask “anyone there?” The photograph is from the early 20th Century and shows girls outside the Victorian school in School Street Southam, the building is still there and now houses a nursery. Anyone with an interest in local history is welcome to join Southam Heritage Collection. See our website southamheritage.org for details or email southamheritage@hotmail.com or telephone Bernard on 01926 613503 or Linda on 01926 814214. 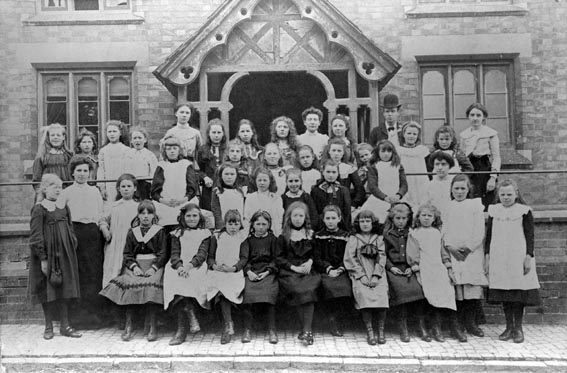