Made and Sold in Southam

It was thought for some time that Southam was very famous for cider-making in the 17th century. Further research suggests that, although cider was made in our town, what was known as the famous Southam cider was really a cider made in South Hampshire, which was exported to many parts of the world and was mentioned in books of the time.

However, plenty of other businesses have flourished in Southam. A few years ago Michael Hill interviewed Mr Jim Fox whose memories were recorded for our oral history collection. Jim remembered that Southam was a hive of activity in the days of his youth during the early twentieth century.

Jim recalled the tinsmith who lived by the Co-op. His name was Tinny Fletcher and he used to make kettles and saucepans for the locals. He also made the cup for the Donkey Derby, using the candle-holders off an old piano to make the cup handles. The cup was then placed in a glass case in the Social Club.

There was a Shoe Factory in Southam and mustard was made in a building at the side of the Red Lion. Another of our interviewees, Edie Plummer, remembered that the business was called Tomlinson’s.

Goodwins were the local wheelwrights, and large clocks were made in Warwick Road. The local blacksmith, Len George lived by Brewster’s Corner. Watson’s were the builders on the corner of Welsh Road West and Coventry Street and White’s the Tailors was near to The Mint public house. Further up the road was Tommy White’s stone masonry business. 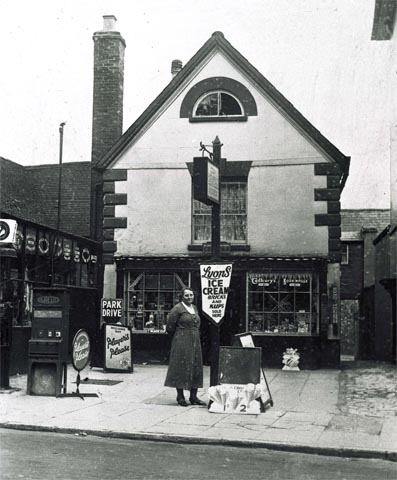 Edie remembered that Mrs Fitchett was the first person to make and sell ice cream in Southam. There was also a saddle maker called Mr Brown. Joyce Bates fondly remembers Mr Goode, a cobbler in Pendicke Street. She and her friends used to play whip and top in the street as children and Mr Goode used to mend their tops when they broke, and gave them sweets.

Of all the products mentioned by our oral history contributors, sweets were by far the most often mentioned, probably because their memories were from childhood days. Edie mentions Miss Basson who had a sweet shop and general store where Mr John Goodwin later had a bungalow built in Pendicke Street. Two Miss Phillips ran another sweet shop in Oxford Street near to Mr Cardall’s Blue Ping Garage. Another was run by Mrs Tyler on Market Hill near the corner with Warwick Road, and Mrs White ran another sweet shop next door to The Old Mint Public House.

Many people remember Norah Hope’s sweet shop which used to be where a Chinese Take Away is now (see photograph). Tony Fell remembers going there to buy scented cachous which were breath freshening sweets, rather like aspirin pills, some of which were Parma violet flavoured.

If anyone can remember more about the early 20th Century shops and businesses in Southam, we would be pleased to receive the information to add to our records.

For more information about Southam Heritage Collection please call into Vivian House basement on Market Hill on Tuesday or Friday mornings (10am to 12 noon) or email cardallcollection@hotmail.co.uk or telephone Bernard on 01926 613503 or Linda on 01926 814214.