The 15th of September is Battle of Britain day, and this year is the 75th anniversary of the Battle, in which the iconic Spitfire fighter plane played an important role. But did you know that Southam once had its very own Spitfire sitting a Southam garden? It had nothing to do with the WW2 airfield where Flying Fields Road is off Welsh Road East. It was Spitfire TB863, delivered for service to 453 Squadron Royal Australian Air Force at RAF Matlaske in Norfolk to replace a Spitfire lost over Holland a few days earlier. Its first recorded mission was at 8am on the 24th March 1945. 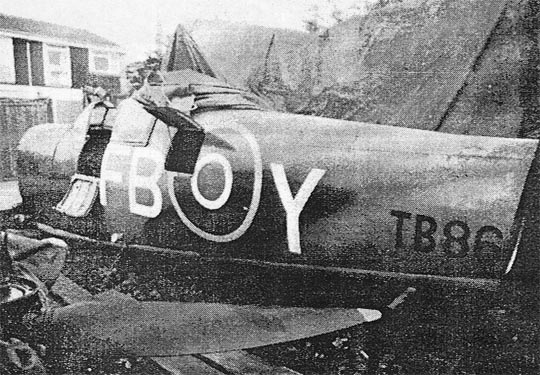 So how did a Spitfire get into a garden in Stowe Drive between 1977 and 1982? Bill Francis brought it with him when he moved to Southam from Southend-on-Sea; he had bought it in 1968 from Pinewood studios with a view to restoration! The Spitfire hadn’t stayed long with the Australian RAF, because it showed up in records on 5th July 1945 with the 567 Squadron at RAF Hawkinge in Kent. This was a training unit and the Spitfire was still with them when they disbanded in June 1946 and was allocated to 691 Squadron at RAF Chivenor where it remained.

Its flying highlight came in 1950 at Farnborough, when with 7 other spitfires it was repainted in Luftwaffe colours for a re-enactment of the famous Amiens Prison attack in the RAF ‘Messerschmitt Staffel’ display. Its RAF career ended the following year when it was handed over to the newly formed Civilian Anti-Aircraft Co-operation Unit based at Exeter. It was painted silver for its new owners, but an unfortunate flying accident grounded it after an engine failure on take-off.

This was when the Spitfire began a new life in film – Metro-Goldwyn Mayer purchased it for the famous film “Reach for the Sky” made in the summer of 1955. The film starred Kenneth Moore and was about the wartime flying career of Sir Douglas Bader. The cockpit was used for shots at MGM’s Pinewood Studios and on completion of filming the Spitfire was stored in the props room for possible future use. However it deteriorated in storage and 12 years later in 1967 it was minus its engine and the cockpit had been modified, no doubt for the earlier filming. It was moved from Pinewood to Henlow in January 1968 and surveyed for possible use in the film “Battle of Britain”. However, its only use was for spares, and soon after it came into Bill Francis’ hands.

Unfortunately Bill never managed to restore it and he sold it on to Steven Grey, who moved it to the Imperial War Museum at Duxford near Cambridge, where at last it was almost fully rebuilt. But in 1987, before it was completed, it was sold to New Zealand. Here its restoration was finally finished and our Spitfire was soon flying again in the same colours and markings as when it served with the Royal Australian Air Force over the European skies during WW2.

In 2006 it was sold yet again, this time to the Australian Temora Aviation Museum and as far as I am aware it is still being used in flying displays down under.

If you have any Southam stories, or are interested in our local history you would be very welcome to join Southam Heritage Collection. Please email cardallcollection@hotmail.co.uk or telephone Bernard on 01926 613503 or Linda on 01926 814214.