Southam from the Air

The first recorded powered flight was by the Wright brothers in 1903 and Louis Bleriot was the first to cross the English Channel in 1909. So when the Great War started in 1914 the aircraft was a crude and flimsy machine and navigation relied on map reading whilst in the air and looking for landmarks as guides – cloud free flying was an absolute necessity.

The development of aircraft was hastened by the needs of war and British Airmen started World War One as part of the British Army. By the end of the war in November 1918 they had become the newly created Royal Air Force. In just four years the changes in aircraft brought about by war were tremendous. What was initially used mainly for reconnaissance and flown by a pilot and co-pilot in cramped cockpits without parachutes, had developed into two entirely different forms of aircraft – the fighter and the bomber. 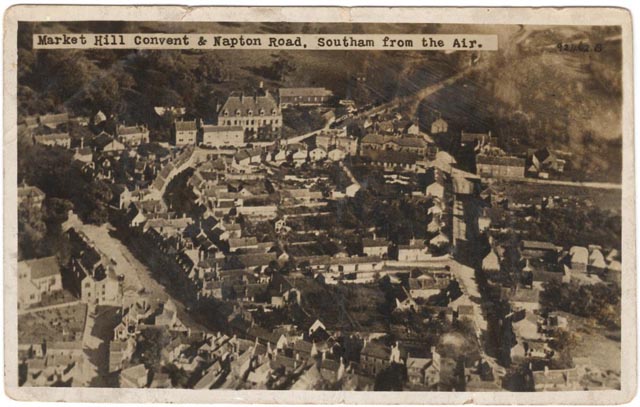 The web site Britain from Above (1919-1953) (www.britainfromabove.org.uk) includes eight excellent aerial photographs of Southam taken in 1929 and 1930. Southam Heritage Collection is fortunate to have an even earlier aerial photograph, though undated. A copy of this early aerial photograph is part of our new exhibition “Tithes, Taxes and Old Southam Town” which you can visit on Tuesday and Friday mornings between 10am and 12 noon in the basement of Vivian House on Market Hill – use the Park Lane entrance and once inside, look for our door on the right. If you would like to arrange a group visit outside these opening times, please get in touch.

There is some fascinating detail in this aerial view of Southam just after the First World War: the tree-lined High Street, the farm buildings fronting Pendicke Street, and the impressive buildings in Wood Street and Oxford Street before their demolition.

It has been an interesting exercise dating this aerial photograph and although we have an approximate date, we’ve been unable to pin it down exactly. We can say that the photograph was taken before 1924, because that was when the Roman Catholic Church in Wood Street was built and there is no sign of that church in the photograph, or even any sign of clearance of the site in preparation. This gives us a window of five years between the end of the war and the building of the church. Should anyone be able to give a more exact date for this photograph, then we will be pleased to hear from you.

If you would like to find out more about Southam Heritage Collection please email cardallcollection@hotmail.co.uk or telephone Bernard on 01926 613503 or Linda on 01926 814214.