Discussions have taken place regarding the naming of new Southam roads after the town’s fallen soldiers. Here, Alan Griffin tells us about three such soldiers.
Near the South wall of the parish church is a large upright stone bearing a carved cross and an inscription, now largely illegible, which reads as follows:-

In memory of Thomas Abbots (killed at Alma) 68th regiment Thomas Pratt
James Baldwin Royal Marines. These men died serving their Queen & country
when in defence of ye right England and France waged war with Russia 1854
and 5. Endure hardness as a good soldier of Jesus Christ 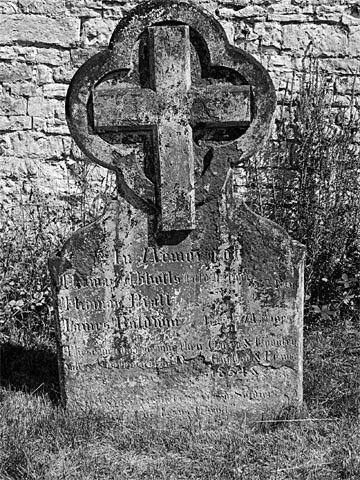 Thomas Abbotts was a young man of twenty when he left Southam to enlist. The 1851 census tells us that he lived in Warwick Road and that he and his four brothers and his father John were agricultural labourers. Thomas Pratt was a member of an old Southam family of Inn Keepers who kept The Crown public house. Before joining up he was a general labourer. James Baldwin was aged thirty, his father William owned the windmill on the road to Priors Marston but since James does not appear in the 1851 census returns, it can be assumed that he had already left home to enlist in the Royal Marines prior to the outbreak of war in 1853. These and doubtless other young men embarked for duty in Crimea as part of a British force of some ninety-eight thousand soldiers and sailors. Most had accepted the ‘King’s Shilling’ in the expectation of a life of travel and opportunity far removed from the mundane prospects marked out for them in rural Warwickshire.

The war in Crimea was fought with new industrial technologies but it was conducted under old codes of chivalry by the British Army which was led by aristocratic amateurs with no experience of warfare. The campaign was characterised by incompetence, neglect and suffering which combined with the cruel Russian winters and disease, led to the deaths of thousands of soldiers. The most serious problem which dogged the operation was one of logistics: supplying the men with their basic necessities. Most men had only the clothes they stood up in. They had no change of clothes for weeks and were glad to ‘recycle’ uniforms of colleagues killed on the battlefield. In winter, many men had no cloaks and their permanent accommodation was in tents. Many had to sleep out in the open and woke up frost-covered. There was never sufficient food and no leaf tea had been shipped out. The many horses on which the Army relied were dying of starvation in a pitiable condition due to lack of forage. The horses were so hungry they ate the tale hair of other animals and would even try to chew the Troopers’ beards.

Such was the lot of the men whose names are carved on the memorial stone. Thomas Abbotts was killed at the Battle of Alma serving with the 68th Regiment. James Baldwin (Royal Marines) and Thomas Pratt (68th regiment) most probably died of cholera and neglect as did sixteen thousand other British soldiers who served in the campaign. They most certainly ‘endured hardness’ and we owe them our remembrance.

Alan Griffin’s book ‘Lest We Forget’ tells the story of the Southam men who fought and died in the 1914-1918 War. Copies are available from Southam Office Supplies and Southam Heritage Collection. The Collection is housed in Vivian House, Market Hill and is currently open on Tuesday and Saturday mornings from 10am to 12 noon. Contact: 01926 613503 email cardallcollection@hotmail.co.uk and find us on Facebook: Southam Heritage Collection.