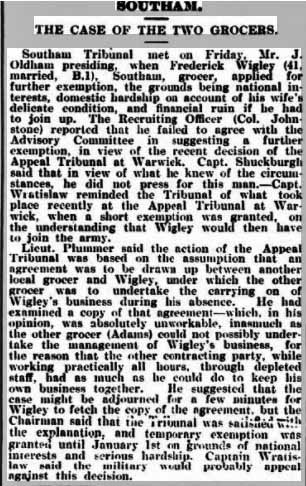 Born in 1877, Frederick was the son of Septimus Wigley, a licensed victualler, from Birmingham.  He settled in Southam and took over an established grocery business in High Street and in 1913 he married Ada Mann, daughter of a farming family from The Firs in Bascote. Both were in their late thirties at the time of their marriage but children followed – sons John and Ernest.

The lifting of the age limit meant that in 1916, Frederick aged 41 years, received his conscription papers.  He appealed and details of the tribunal deliberations were covered in the local press and his appeal was granted (see details). However this was overturned a week later when the military contested the decision.

Private Wigley served in the Royal Army Service Corps as a ‘Packer and Loader’ in this country although he had been passed as ‘fit for overseas’.

He was discharged in March 1919 and his health was not good – 20% disablement. He had been an out-patient at Woolwich Hospital and suffered, according to medical reports, from rheumatics aggravated by military service, heart trouble, and skin disease. The latter was ‘Kelsoids’ an acutely painful and itchy condition with benign growths on the back, chest and legs.

He returned to his grocery business which had been maintained in his absence by his wife despite her being of ‘delicate condition’ and having two very young children to care for. His name crops up in the activities of RBL and he continued running the shop into his sixties. Ada died after a sustained illness in 1942 and Frederick died in 1949. They are buried in Southam Church yard.