John, a cement worker, enlisted in early 1916 in RWR: at twenty one he looked fit and very young.  He joined the Royal Engineers whose war records show him moving steadily through small promotions to corporal. He had leave to the UK four times during 1916-1919. He spent time in 1919 in the 14th Stationary Hospital, Boulogne not long before he was discharged from duty. He appeared to come through the war relatively unscathed – although synovitis (painful inflammation and internal bleeding on the knee) – a consequence of a fall in camp in 1919, did not get him a pension. 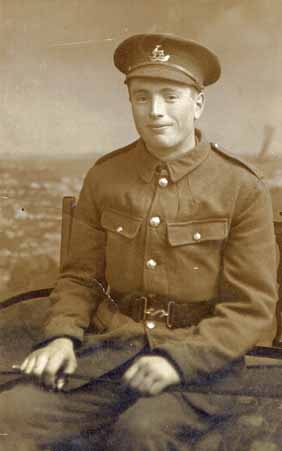 The recollections of his daughters Mary and Cissie (interviewed in 2014 and both by then in their 80s), offered a more nuanced picture of his overall condition. They understood that their father had been gassed and said that he always suffered with his chest as a consequence. As youngsters, during the night, in their cottage home on Leamington Road, they would repeatedly hear his hacking cough.[1] 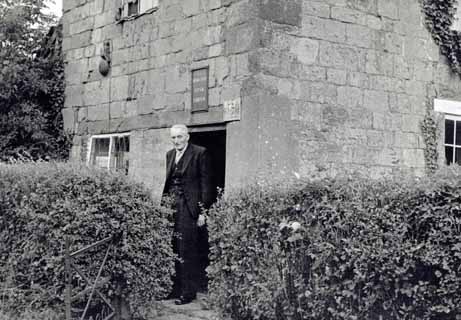 In 1927 John had married former VAD Lily Burnell. He moved into the Burnell household and the house was extended, two cottages being knocked into one.  Mary and Cissie spoke of father working as a carrier so perhaps he eventually left, or did not return after the war, to the dusty environment at the cement works. In later life he was employed as the Bank Guard one day a week at Napton. Pictured here, he does not look fit enough, nor well equipped, for the role of guarding the bank from money thieves!

John and Lily were still caring for Lily’s dad Omer, the former postman and volunteer fireman, in 1939. By then Omer was a 85 year-old widower and together they lived at The Lodge, Southam.