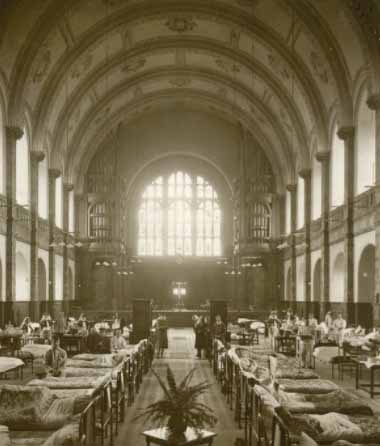 1st Birmingham War Hospital using the Great Hall of Birmingham University where, these days, degree congregations and other special events are held.

Ernest enlisted in December 1915 and served first with the Durham Light Infantry and later with the East Surrey Regiment. The Leamington Courier noted (24th May 1918), he had several spells in hospital. His medical records indicate he incurred two major wounds.

He had a thigh injury caused by a bomb and was transferred from a French Hospital to 1st Birmingham War Hospital in July 1918 and sent on to Tipperary Command depot the next month. Pictured here, the 1st Birmingham was a huge reception hospital where severe cases were treated. Others, more mobile, were transferred from there to auxiliary hospitals such as the Southam VAD Hospital. The 1st Birmingham had over 500 nursing staff by the time Ernest Turner arrived there.  He would have experienced a long journey by boat and train from France and ambulances transferred them to the hospital.

Later the same year he spent 46 days in hospital (not clear from the records where) with influenza (discharged 7th October 1918). At some point during his service he had a gun-shot wound in the left buttock and this continued to be a source of pain and infection for in 1919 on 21st October he was admitted to Warwick Military Hospital to have this ‘incised’.

The military authorities discharged him from service the next day after the operation. A ‘coal labourer’ by trade he was put on the reserve list but, despite his injuries, no pension was awarded.