Cyril T. Turner, born in 1898, was the youngest of the Turner brothers who went to war. He served with the Royal Warwickshire Regiment. According to the Leamington Courier (24th May 1918), he had been serving in France for two years. No more information, despite extensive searches, has been found. 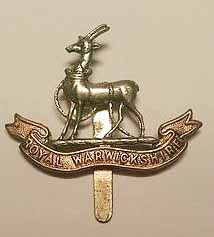 According to staff at the Royal Warwickshire Regimental Museum in Warwick many records of RWR were destroyed by fire in WW2; perhaps this explains the absence of information concerning the war records of Private Turner.

After the conflict he married Lillian May Barnes in 1924 and their first child, born the same year, was called Arthur – like his two-year-old cousin, son of Ernest. There were numerous babies born to couples with the surname Turner in Southam in the 1920s so roll call at the school was likely to have been quite confusing!

Photographs or more information about the Turner brothers who went to war would be a welcome addition to this archive if anyone can help.