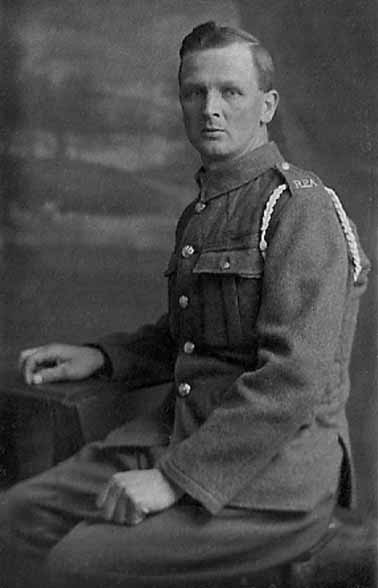 Thomas’s great nephew Alan Cross recalls being shown and allowed to play with medals kept in the sideboard at the house of his mother’s Uncle Rich in Pendicke Street, Southam. Uncle ‘Rich’, as he was known to Alan, was the only son of Thomas and Minnie Fennell. Alan’s memory of the medals and a Royal Field Artillery cap badge with a rotating piece, a bayonet and bronze badge plus this photograph thought to be Thomas Fennell, are the only pieces of evidence known to the family about someone in that household’s war service.[1] Alan has deduced this to be Thomas from the age of the man on the photograph.

Thomas was the son of labourer William Fennell (b. Southam circa 1835) and his wife Ellen (b. Bascote 1855), who lived in Coventry Street. Thomas, who was born in the summer of 1879 and baptised on 10th October 1880, was one of ten children, seven of whom survived. By 1911 he was the only offspring left at the family home, single and living with his elderly parents. He was a labourer at the lime works and his father, aged 76 years, was classed as a ‘Bag repairer, cement works’. In 1913 Thomas married Minnie Knight (b.1879) a cook with the Oldham household. In 1914 their only son (remembered as Uncle Rich) was born.

All traces of Thomas Fennell’s enlistment papers appear to be lost. Many men named Thomas Fennell served in WWI and are listed in the medal rolls but details of identification are insufficient to identify his record. We know from Alan’s memories that Thomas was awarded medals – British and Victory are the likely ones and possibly the Mons Star if he joined in 1914 and if that is the bronze medal  that Alan recalls. We do not know where he served or if he was wounded.

After the war he lived with his wife and son in Pendicke Street (see right) and worked as a builder’s labourer. He is known to have been a reclusive man who would not have his photograph taken in later years. His great nephew Alan adds ‘he was very good at drawing, his sketches being almost photographic. He also played the violin for his own amusement’. He died in 1957 and is buried in Southam.