William Sturley was twenty five when war broke out. In 1909 he had enlisted in the Warwickshire Yeomanry, part-time soldiers who undertook regular training activities, and who went off on camps.  The group photograph shows ‘B’ Squadron from Warwick, Leamington and Southam who were winners of the annual countywide Yeomanry shooting competition.  It has been suggested by historian Malcolm Thomas that the Yeomanry wore these spectacularly impressive uniforms to encourage others to join. They were often nicknamed ‘Saturday night soldiers’ because their uniforms impressed the girls at dances or in church, and made their contemporaries jealous. William Sturley is standing, left of the board. 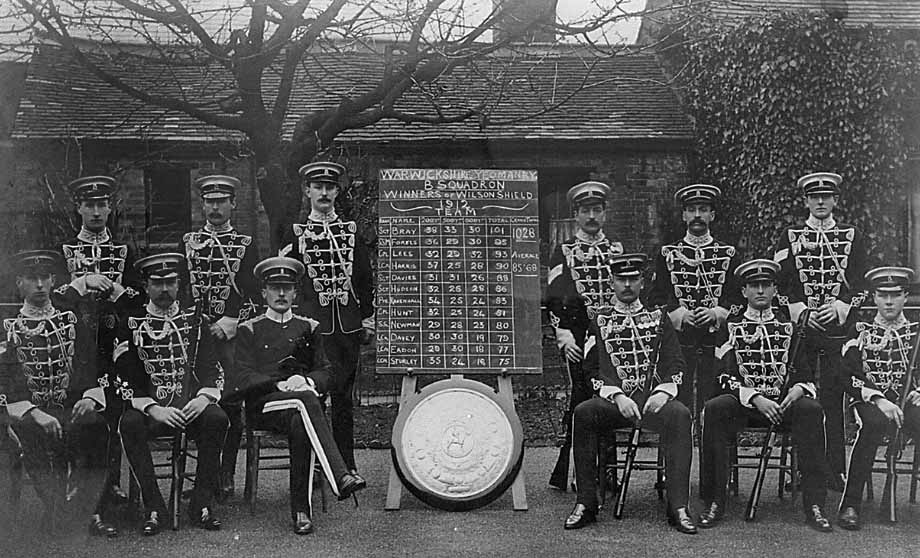 The Warwickshire Yeomanry were mobilised immediately war broke out and many, including William Sturley, signed up for Imperial Service, which meant they could be sent abroad. They set off to camp in Newbury. It must have been a worrying time for William’s mother but he assiduously wrote short letters throughout the conflict, and it seems he had what might be termed a ‘good war’.

In 1915 the Yeomanry set sail for Egypt.  The horse transport The Wayfarer was torpedoed on the way, but William was not, as far as can be established, involved in the tricky rescue of the hundreds of horses at sea. At Gallipolli he was wounded but safely hospitalised. By March 1916 he was hoping to have leave and wrote to his mother asking her to get his bike repaired! 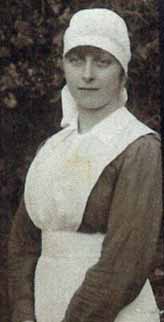 Back to Egypt, after travelling out on The Corsican he wrote that he had received a ‘splendid parcel’ from Beattie Langdon.  Did his mother sense a romance in the air? Beattie (left) became a VAD in Southam in 1917. Writing a Christmas message to his brother George, who was in France, he admitted it would not be merry, but he did not worry his mother with this and she received a small, smart regimental card with an exotic picture of the pyramids.

William returned to England to train as an officer, obtaining a temporary commission as second lieutenant in January 1918.  Wounded again he spent time at the casualty clearing station La Citadelle, Doullens. By February 1919 he was recovered sufficiently to do a bit of sightseeing visiting Roen Cathedral, assuring his mother that he was doing fine. Brave in the face of adversity, or just plain lucky we do not know.

Fortunately he seemed to suffer no after effects of the war and settled down as an insurance agent and to married life with Beattie (who had sent the parcel) and they had eight children. Always a delicate woman, she died young. William remarried and produced another family of three in the late 1940s. William belonged to a Masonic lodge in Warwick and is remembered as a pillar of society in Southam. He died in 1964.

(Based on conversations with Alan Sturley, Beattie and William’s youngest son. Insight into the Warwickshire Yeomanry from Malcolm Thomas)