William Stephens, known as Billy, was a born in 1883 in Denford, Northamptonshire and he married Helen Maud Robinson in Flore in 1903.

He was thirty-two when he attested in December 1915. By then he was established in Southam, a well-known figure who ran the barbers shop and tobacconist on Market Hill. His wife assisted in the business and they had two children. He joined the Royal Warwicks and his records show that he left for France in June 1917, disembarking at Le Havre and was stationed at Rouen ‘in the field’.  At the top of his records it states quite strongly and clearly ‘hairdresser’ so whether he was at base behind the lines as a hairdresser or embedded with his troop is not apparent.  He was given a week of leave in October 1918 and demobbed in March 1919. 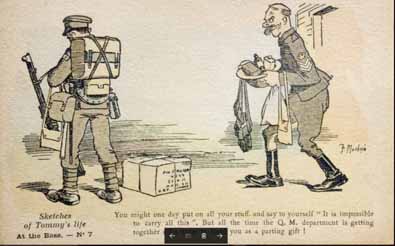 Billy is remembered in Southam not just for his haircuts, and his activities as a part-time entertainer. The local paper reporting his enlistment suggested ‘Pte.Stevens will be able to enliven his comrades with the excellent comic songs he has so freely given at entertainments for the benefit of any deserving object in the town’.[1] He is still remembered for the WWI postcards, a framed set of thirty-six cartoons by F. Mackain that hung in his shop which young and old alike could look at as they awaited their turn. These ‘Sketches of Tommy’s life’ satirised the officers and NCOs, and sympathetically focussed on the trials of the poor Tommy.[2]  They would have struck a chord with many who returned from the war.

Billy’s wife Helen became a VAD during WWI but she sadly died in 1924,[3] so in later life he was helped in the shop by his daughter Maude.  Maude did much to preserve Southam’s heritage by passing on photographs to local historians.

[3] For details of Helen see our archive VAD folder or  visit southamheritage.org/vad-front-page/vad-helen-stephens