Born in Kent, son of Naval Commander Hugh le Despencer Stapleton and his wife Bertha, Gerald spent his childhood in Southam. The family lived for about a decade at The Grange with a governess and a full complement of servants – butler, groom, cook and maid servants.  At the age of about ten Gerald began the tough life of a Naval Cadet at Dartmouth. By 1912, when Britain was in the throes of rearmament, he was a Midshipman on HMS Colossus a Dreadnought battleship built in 1910. The vessel was used in the Grand Fleet to patrol in the North Sea and is pictured here at anchor with other ships of the fleet in Scapa Flow in 1916.

Gerald Stapleton went through most of the war as a Sub-lieutenant and was created Lieutenant in 1917. His progress in the Navy did not match that of his father. Senior officers’ reports outline his difficulties:

1916 Below average intelligence [not] much aptitude for naval life, may develop, not much capacity to command men.

1917 Inclined to get overexcited with men…volunteered for submarine service.

1918 Removed from submarine service on account of adverse reports…exceeds a reasonable consumption of wine.

1919 Can be capable but lacks zeal and all sense of responsibility due to his rank.

1920 Conduct fairly satisfactory has had to call his attention to large wine bill and to limit same to £5 per month. 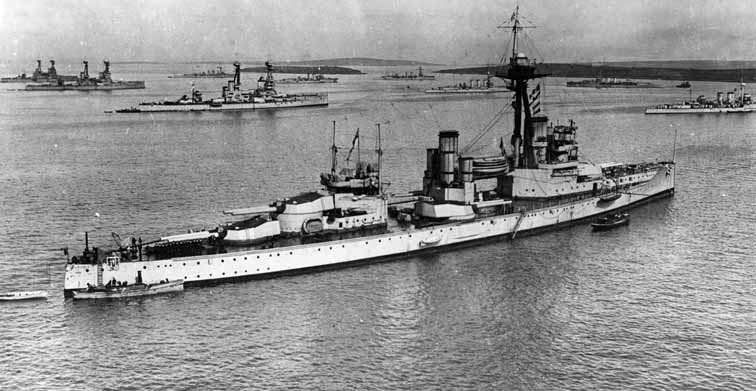 Unlike his father’s distinguished record, Gerald Stapleton’s military career was inauspicious. It must be acknowledged that he was serving in extreme war conditions and these appear to have taken their toll.

Like his father he did not necessarily find it easy to settle on shore. In 1923 he went to South Africa and in 1925 to Australia. At the time of his death in 1967 he lived in the Isle of Wight but his death occurred in Hong Kong.

Lieutenant Stapleton’s name appears on the naval lists next to his father and he too gained all three war medals.