Oliver was born in 1896 son of Alfred Spraggett, a stone quarry worker from Long Itchington and his wife Sarah, who came from Southam. They lived on Banbury Road and Oliver attended the Council School before going to work in the brick works in the drying sheds.

Private Spraggett enlisted on 7th September 1914 in the Royal Field Artillery as a gunner. He served in France for fourteen months and was transferred at some point to the Tank Corps joining C Coy 17th AC Battalion.  On 4th July 1916 he was admitted to the 13th General Hospital, Boulogne with ‘Wounds and shell shock’. He was returned to Britain on H.S. St Patrick and spent time in Bethnal Green Military Hospital and 7th Depot at Romsey, Hampshire.

Private Spraggett was then posted in October 1917 to the Depot Battalion at Wareham but from then on his service is beset with punishments for absenteeism and irregular conduct. Despite shattered nerves from exposure to shell explosions he was not discharged until March 1919. 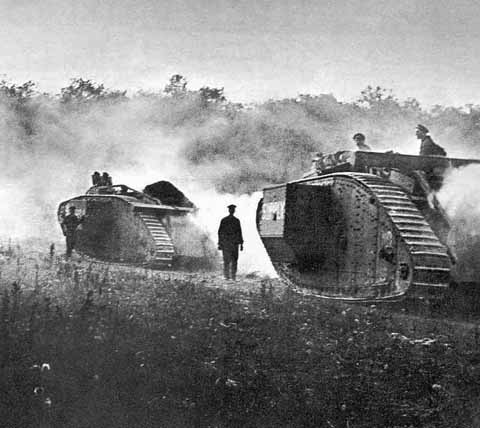 For the next two years this wounded and suffering soldier, recipient of 1914-15 Star, and Victory and British medals was required to present himself for medical examination. He described his nightly bad dreams, shattered nerves and shaking hands but the medical reports seemed keen to find his evidence unreliable and decided by 1920 that he had suffered ‘no impairment to health’ due to his military service.

He returned home to his parents and little more is known of him. He married in 1925, had children and lived to a good age. He died in Solihull in 1966.