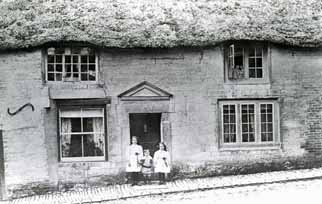 and Georgina Rathbone (grandparents of Rowan Parker), lived on Abbey Lane with their large family of nine children.

William (senior) was a general labourer but he was a man with an eye to the future and by 1911 he was working as a ‘motor car driver-domestic’ at a large establishment in Snape, Suffolk. Meanwhile his wife, Georgina, was at home catering for eight children including a baby and a lodger, her brother-in-law James.  Rowan Parker says his grandfather worked as a ‘gentleman’s valet’ in London and moved around.  Certainly he was successful working for affluent employers for he eventually worked locally as chauffeur to Mr Lister Kaye of the Cement Works. 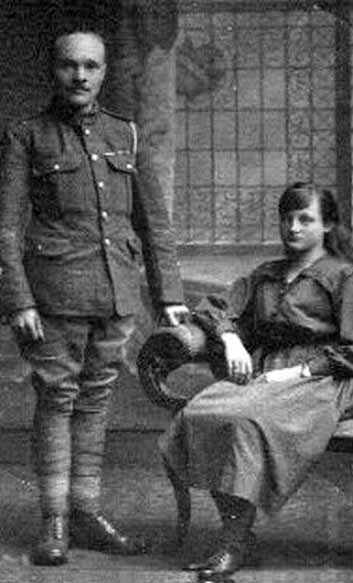 William and Georgina’s eldest son William, born 1893, worked at Stoneythorpe Hall as a gardener. He is seen here on a staff photograph seated on the right on the ground. He enlisted in the army, served with the Oxford and Bucks Light Infantry also being attached to the Munsters.

Sergeant Rathbone survived the war; this picture with his sister Elsie is thought to be taken in 1918. In 1921 he married eighteen-year-old Eva Winifred Meredith in Napton Church. Subsequently the couple lived at 53 All Saints Road Warwick where William’s elder brother James lodged with them. William worked as a foreman of a steel spares department.

Eventually William and Eva moved to Kerrier near Helston in Cornwall where William died in 1966 and  Eva lived until her death in 1997.