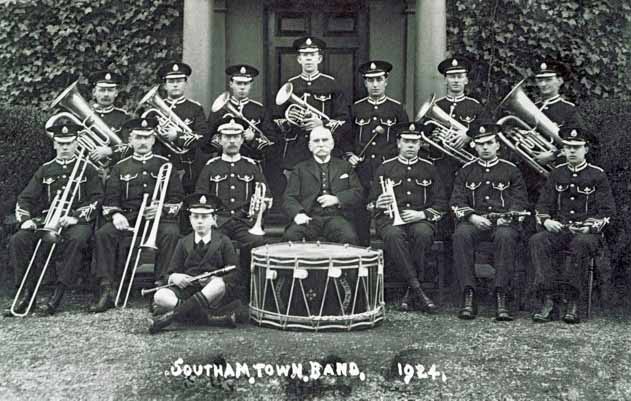 James Rathbone (trombone) is pictured here second from left in 1924

James Rathbone, great uncle of Rowan Parker, was a stalwart of Southam Town Band. His obituary (Leamington Courier 22 July 1949) shows that he was playing at public events just a week before he died aged 76 years. James was a dedicated trombone player and members of the band honoured him at his funeral at Southam Church.

James was born in 1876 one of six children of Charles and Emma Rathbone of Leamington Road. James worked locally in the quarry industry, and during WW2 and afterwards in a Coventry factory. He did not marry and lodged with his sister-in-law at Abbey Green.

He served in WWI[1] but so far the usual searches have not revealed details of his rank, regiment or service.