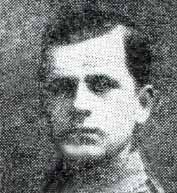 Walter Poulton was baptised in Southam on 16th May 1880 on the same day as his older brother Harry.  His parents George Charles and Ann Poulton organised a join baptism for the two babies who were born within two years of each other. The family lived in Daventry Street and eventually both brothers, like their father became quarry men at the lime works.

Walter enlisted with Royal Warwickshire Regiment early in the conflict serving in France from 1915. He was awarded the Mons Star in addition to Victory and British medals. The Daily Mail in December 1917 published photographs of the two brothers for it was remarkable that they had been awarded the Military medal, the highest honour for bravery for a non commissioned soldier, within a few days of each other.

The Daily Mail also noted that noted that Walter had been wounded three times and that he had ‘received his discharge’.[1] In effect this meant he was transferred to the Labour Corp and whilst serving in this capacity he achieved the rare distinction of a bar to his MM.

Private Poulton was wounded three times in the war and little more is known of his future life. In 1939 he was a road man, single, lodging with relatives in Coventry and he died in 1951.

There appears to be no trace in the local press of a man who committed such acts of bravery, suffered repeated wounds and who gained double military honours for bravery.