Eric Lattey served with distinction throughout the war but his life ended tragically early, in a road accident in Rhodesia. Eldest son of Dr and Mrs Lattey and older brother of Alexander (see A. Lattey), Eric showed promise from an early age. He attended Greyfriars School, Leamington from the age of nine and won an exhibition to St Andrews College, Bradfield.[1] He went up to Oxford but like so many of his generation at the outbreak of war, he left before completing his studies to join the colours.  By July 1915 he was leading his men as a Lieutenant at the front.

Serving with 3rd Battalion Worcestershire Regiment, he was injured early on at Loos but went on to be awarded the Military Cross and Bar.  He was gazetted in both 1918 and 1919 for conspicuous actions of bravery. At Lys in early September 1918 he gained his first medal for ‘conspicuous gallantry and devotion to duty…he organised a counterattack and drove the enemy back, inflicting heavy casualties’ and his second when throughout the operation of 25th-26th September, South of Neuve Chapelle, he led his company ‘with conspicuous courage and ability, making the most skilful disposition in reaching his objectives, ensuring a minimum of casualties and entirely defeating a heavy counter attack. It was due to his example and complete disregard of his own safety under the heaviest of fire that his company succeeded in the task set them’.[2]  For more military details of the action see Alan Griffin’s Lest We Forget, pages 76-80. 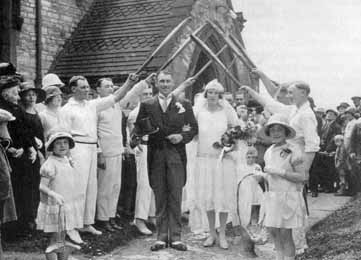 A man of courage and talent, who had served his country with distinction, he had no profession to fall back on when he returned eventually to Southam.  He did not go back up to Oxford to complete his degree.

In 1926 he married a local girl Mary Brewster, daughter of business man Alexander Brewster and his wife Ethel. On his wedding certificate Eric called himself ‘gentleman’ and as captain of the cricket club, players made an archway of bats outside the church. In 1928 his first son was born. His wife busied herself with good works organising events along with her mother Mrs Alex Brewster and mother-in-law Mrs Lattey right up to the days before Eric and his family emigrated to Rhodesia to be farmers.[3]

Life probably seemed promising when on 30th October1930 they sailed third class on the Carnarvon Castle from Southampton to begin their new life at Red Hill, Eldorado in Southern Rhodesia. Another son, Michael, was born in 1931 but tragically, in February 1935, Eric was injured in a motor accident on the farm and died of his injuries in Sinoia Hispoital, Eldorado.  It appears from probate records that financially he was not prospering too well, for he left only about £68.   The boys and their mother returned to England. Michael eventually went to Agricultural College in England and returned to Rhodesia to farm. When Michael married there in 1955 a handmade lace shawl, a Lattey family heir loom, was sent to the bride-to-be from the bridegroom’s relations in Southam.[4]

On her return to England in 1935 Mary Lattey lived in Southam and was involved again in the church, Mothers Union and other good works, and gave talks on ‘Her experiences in Southern Rhodesia’[5]. In WW2 she was an ARP warden.  She died in Northamptonshire in 1987.