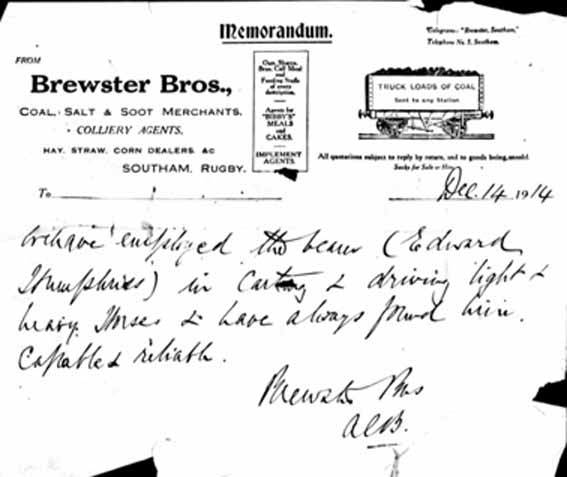 Edward was the second husband of Caroline Parrott and step-father to her children. His step-sons Jack and Cyril both served throughout the war as did he, enlisting in December 1914 and returning to Britain in July 1919.

Edward was a Southam man born in 1884 son of Edward and Elizabeth Humphriss of Napton Road. Both Edward Humphriss senior (born 1841) and his son Edward had regular brushes with the law, the older man for failing to pay maintenance for his daughter (with a threat of prison if he did not pay arrears of £2.3s) and Edward junior for using obscene language on the public highway. He was fined 11s.6d in 1904,[1] and a year later 16s.6d.[2]

Maybe in his youth Edward was a bit of a lad but at the age of twenty-nine he married Caroline Parrott, a woman fourteen years his senior and took on a family of step-children. He enlisted in the war taking with him this excellent character reference from his employers Brewsters of Southam who stated that they always found him ‘capable and reliable’.

Driver Humphriss served in the Army Service Corps from December 1914, leaving for France on SS King Edward in May 1916. As a train driver he transported men and animals and, after the conflict ceased, his journeys took him into Germany repatriating prisoners from both sides until dispersal came in 1919.

Drama and tragedy hit the family in 1928 when Edward’s wife Caroline was found, by the postman, dying in a pool of blood at the home of her daughter-in-law in Stockton where she was staying. She had a long and deep wound from side to side of her neck and all efforts to revive her failed. Edward was fetched from his work at the quarry. Her daughter-in-law, who was found hiding in a pigsty, was declared later to be insane and admitted to Warwick Asylum leaving behind two small children. At the inquest, held in the local pub, Drs Omerod and Lattey stated that the wound was self inflicted and the verdict was ‘suicide whilst of unsound mind’. Caroline, who worked as a mid-wife was said to have been unhappy of late. It was thought what she witnessed had turned the mind of her daughter-in-law.[3]