Fred (as he was known) 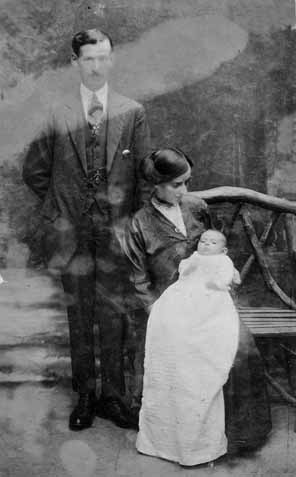 came from a family that was deeply affected by the war. His youngest brother Sidney was killed in France and another brother Arthur lost a leg when he was severely injured. Fred’s sister Margaret later married Norman Cleal who was afflicted by the effects of gas poisoning and died in his thirties. But Fred survived and was still working as a live-in butler at Packington Hall in his late fifties.

Fred was born in 1883 and throughout almost all his career he worked in the service of the wealthy.  In his teens he was a live-in groom for the vicar of Napton, Rev. Arthur Irwin. It was quite a large household for Arthur Irwin was married to a well-connected lady who originated from Shortflatt Tower in Northumberland.

When the Rev. Irwin died in 1906, the family vacated the vicarage and Fred moved to the public school at Harrow to be a footman. This photograph taken by Hills and Saunders, the official school photographer, shows him in formal dress-coat uniform.

By the time war broke out Frederick, by then in his early thirties, was employed on the railway as a signal technician. He continued to live in Harrow on-the-Hill where he met Jane Williams (b. 1880) a Welsh girl from Tregaron.[1] She too worked in Harrow and the 1911 census shows her to have been a parlour maid in a military household. They married in 1914 and had one daughter, Olwen born in January 1916. This worn family photograph, possibly taken on the occasion of Olwen’s christening, shows Jane looking fashionably elegant and, as always, Fred is dapper and well-clad. 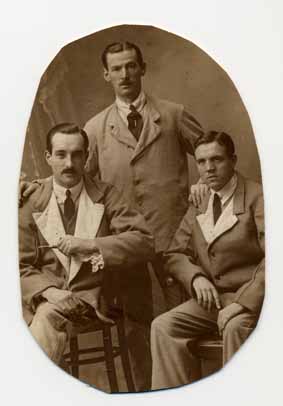 Frederick Hughes’ military service, according to his medical records researched by his nephew Roger Cleal, was spent in England first in the Royal Fusiliers and then the Labour Corp.  He signed up in November 1915, was mobilised in 1916 and his trade was listed as railway signalman.   He suffered a chronic dose of diphtheria and spent more than a year in hospital. He is pictured here, standing behind fellow patients wearing ‘hospital blues’.  Badly afflicted, he was demobilised as unfit for further service from Cambridge Military Hospital in the summer of 1918.

After the war Fred eventually returned to work in private service. In the 1920s he was at Ripton Hall, Abbots Ripton a huge household near Huntingdon. His was in a residential role but his wife made a home for the family at 21 Banbury Road, Southam. 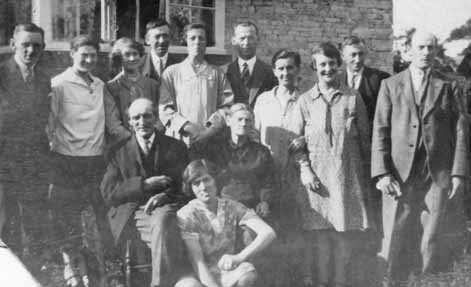 Fred kept in touch with his wider family as this picture taken at the golden wedding of his parents, in 1931 shows. He is the tall man at the back (fifth from the right) and his younger brother, the war veteran Arthur, is nearby on the end of the row.

The 1939register shows him to be working at Packington Hall, another residential position, having risen to the status of butler. His daughter Olwen married in the 1940s and lived to be 96 years old.  Fred died in 1959 aged 76 years and he is buried in Southam. He is remembered with pride and affection by his extended family.