Two men called George Adams from the town served in the war and both suffered serious war injuries. George Frederick Adams (his story is told elsewhere in this archive) survived into old age but this George, who was gassed in 1918, died after suffering illness, in 1922.

George was born in Staffordshire in 1878. By his early teens he was working in his grandmother’s bakers shop on Daventry Street, Southam. He prospered as a business man and by the time of his marriage in April 1911 to thirty-two year old Florence Cardall, he had a grocery, ironmongery and rope-maker’s shop.

George and Florence were a smart couple and their wedding photograph is shown overleaf.[1] They had two daughters (Marjorie b.1912 and Louisa b.1916) but tragically Florence died in December 1918 of pneumonia during the influenza epidemic.

The young girls aged two and four, had not only lost their mother but their father meantime had been gassed in France. The Leamington Courier of 24 May 1918 reported:

‘We hear that Private George Adams is now in hospital in London, after being gassed in France. The gas has affected his eyes.’

George Adams married a younger woman in 1920 and a son Ronald was born the following year. Sadly George did not live long for he died in January 1922 leaving his widow Amy to bring up a baby son and two step-daughters. His funeral was reported at length in Leamington Courier (3rd Feb.1922) for numerous family mourners and business colleagues came to pay their respects as he was laid to rest in a grave lined with ivy in the church yard. Private George Adams was not buried in an official war grave although less than four years after suffering gas poisoning serving on the Western Front, he was dead. 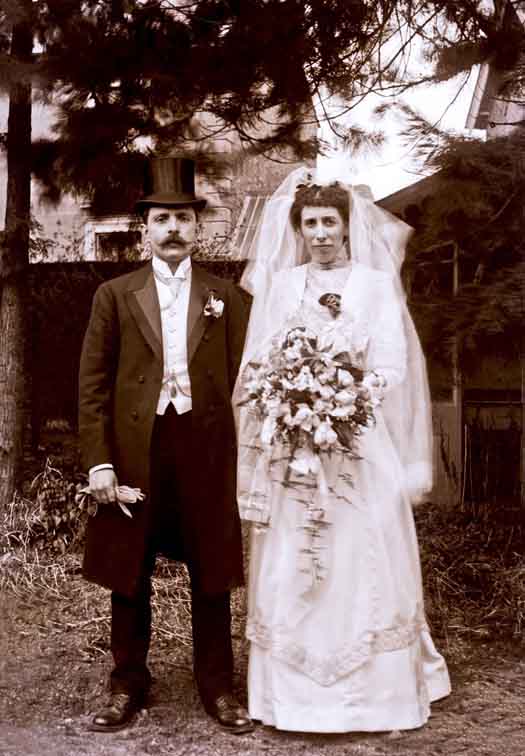 [1] Florence’s dress and the wedding photograph both are preserved in the Cardall Collection at Southam Heritage.