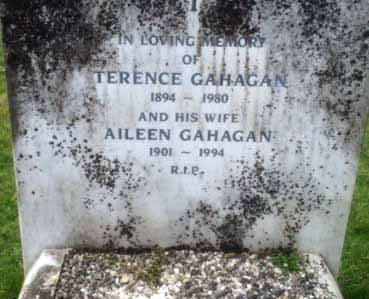 Terence was the younger son of Mrs Webb post mistress at Southam. Her family were all involved in the war effort. Her eldest son Bernard served in both the Canadian and British forces. He received a gun-shot wound in the head in 1915 but survived after being transferred back to Britain for treatment.  Her daughter Frances was a VAD at The Grange and she worked vigorously in the cause of the Red Cross for the war effort before the hospital opened. Her youngest son Terence enlisted in 1916 and in April 1918 Mrs Webb told the Warwick and Warwickshire Advertiser that he was missing in France.

Terence John Gahagan was born in Dover in 1894, but was brought up in Southam where Mrs Webb was post mistress. Around him in Southam there were military activities going on. His brother Bernard was in the Yeomanry and was an organiser of the Yeomanry Ball on 16th February 1912 where the chaps in full dress uniform would have strutted their stuff. At the annual Flower Show military displays and sports competitions were held.[1] Terence was a good athlete coming first in 100 yard sprint at the 1912 Fire Brigade Fete.[2]

With the outbreak of war these activities came to an abrupt end.  His older sister trained as a VAD and Private Terence Gahagan joined the Royal Army Medical Corps in 1916. The War Office Weekly Casualty Lists reported him missing on 21st May 1918. It must have been a worrying time for Mrs Webb whose eldest son had a gun-shot wound to the head.  By 12th November 1918 the Casualty Lists stated that Private Terence Gahagan was a Prisoner of War.

He was awarded the British and Victory medals, and civilian records indicate that he survived, was married in 1928 to Aileen O’Reilly and died in South London in 1980.