Thomas was the eldest of the six sons of Alfred and Ann Fitchett born in 1881. The boys went in many directions for their careers:- manservant, bootmaker, tailor, baker. Thomas became a groom. He married Southam girl Amy in 1904 and by 1911 the couple were living at no 1 Court, Queens Street, Rugby with their two daughters and Thomas worked for Mr Nichols as his groom.

Driver Fitchett served in RFA and went to France in July of 1915. Hence he was eligible for the Mons Star, and the Victory and British medals.

Details of his later life are sketchy. By 1939 Thomas and Amy were living with their unmarried brother Monty, who was an insurance agent, in Bicknell Crescent, Rugby. By then, Thomas, aged fifty eight was blind. He died in Rugby in 1944. 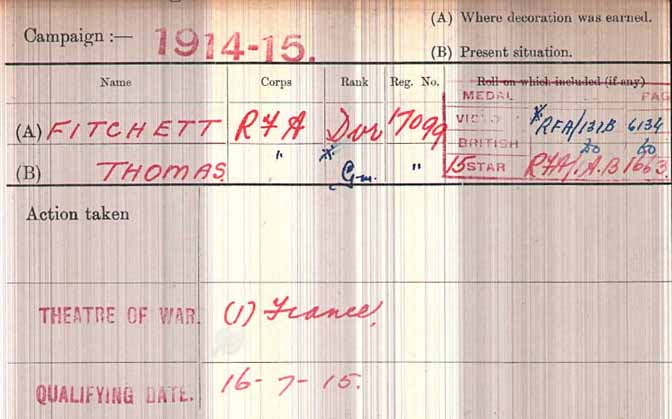