Montague (or Monty as he seems to have been known) was born in July 1894.  His brothers Thomas, William, Tubal and Shirley are also listed in this archive; they are just some of the large family of Alfred and Ann Fitchett. Montague went to Southam Council School and by 1911 he was a carter on a farm and lived in Daventry Street with his widowed mother.

Private Fitchett’s medal card shows he served in the Machine Gun Corps and previously with the Warwickshire Yeomanry. He was discharged in 1919 and awarded all three medals: Victory, British and the Mons Star.

Montague remained a batchelor and worked as an insurance agent. He lived in Rugby at 29 Bucknill Crescent sharing a home with his blind brother Thomas (b. 1881) and Thomas’s wife Amy. Amy was a Southam girl and early in their marriage they had moved to Rugby where Thomas worked as a groom for Mr Nicholls. 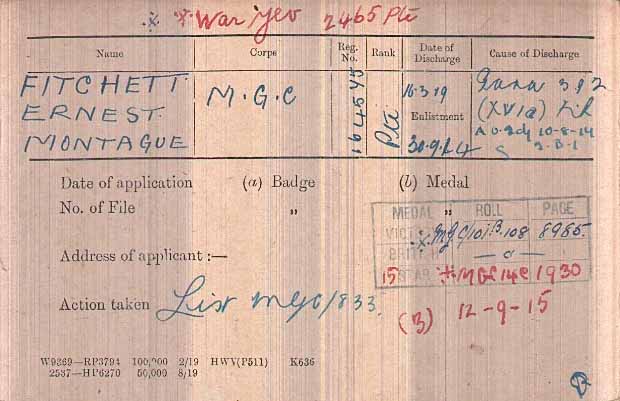