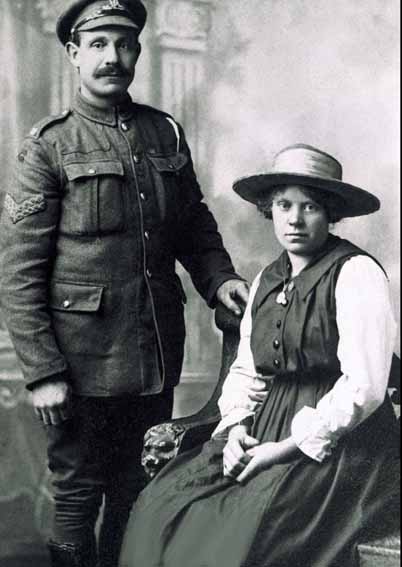 John served with distinction being awarded the Military Medal in October 1917 for bravery during the second Battle of Passchendale. He was with the 66th Battery, Royal Field Artillery and as the Leamington Courier reported he brought in wounded men whilst under heavy fire.

Jack, as he was known, was son of a farm labourer John Fell and his wife Betsy. Born in 1886, he too was a labourer. He enlisted for three years in 1909 in the Royal Warwickshire Fusiliers and as a reservist was recalled to the colours immediately war was declared. A small group of well wishers gathered on Market Hill to wave off six men as they set off in Joe Warwick’s horse drawn cab to Rugby station.[1]

John left behind a newly-wedded wife Olive – they were married in 1913. Olive came from higher up the economic pecking order than her husband. Born in 1890 she was the eldest daughter of Levi and Ruth Shepherd, from Radbourne. Levi was a farm bailiff and the family lived in Manor Farm Radbourne.

Olive lived until 1979 but husband Jack died in tragic circumstances when he was just 54 years old. He was knocked off his bike and fatally wounded near Rugby Portland Cement works where he worked as a night watchman. Visiting him in the Warneford Hospital his son Ronald, later told his son Anthony (b.1950), that it was the night of the Coventry blitz (November 14th 1940) and as Jack biked home he could see Coventry ablaze.[2] It was a tragic night for Coventry and also for the young Southam family of Jack Fell for a few days later he died of a fractured skull and leg injuries. At the inquest the coroner found it was an accident caused by the war-time blackout.[3]

A bayonet and scabbard from WWI belonging to Corporal Fell has been donated to the Southam Heritage Collection by the family. Anthony, Keith, Kelvin and Judith (children of Ronald) wish it to remain in Southam in memory of their grandfather.

The photograph of Jack and Olive has been the subject of much discussion.  He is wearing Corporal stripes but he was not a Corporal when he set out for France on 16th January 1915. He also has a medal ribbon above his breast pocket and he was gazetted for his Military Medal on November 19th 1917. Therefore this photograph was taken not at his wedding in 1913, as previously believed, but after he was promoted and awarded the Military Medal.[4]

[4] Detailed research into the military career of Jack Fell to date this photograph is the work of Malcolm Thomas.