Captain Chamberlayne was aged forty-one when he enlisted in the Household Cavalry in 1916. Henry was the eldest son of William Tankerville Chamberlayne (b.1839) and his wife Evelyn Mary Fitzroy Campbell (b.1852). Henry, along with his brother and three sisters, was brought up at Stoneythorpe Hall. He received a public-school education at Harrow and went up to Oxford to Brasenose College in 1892.

Not long down from University he was made a Magistrate in 1896 but he did not join his father on the bench or take the Oath of Allegiance until 1902 when  he had just returned from America.[1] It was a role in Southam he maintained throughout his life despite other activities.

In 1899 he sailed as a ‘cabin passenger’ (in relative comfort) to Buenos Aires. It was at St. Saviour’s Church, Buenos Aires that he was married to Blanche Helena Fawcett a well-connected young lady from Torquay. The wedding was announced in the press in Warwickshire, West Country and London. His was a complex lifestyle. His great niece, Gill Reid recounted that he was involved in equine dealing in South America and the couple’s second son Vere was born in Argentina in 1905. Henry was on the shipping lists making the trip again in 1908. 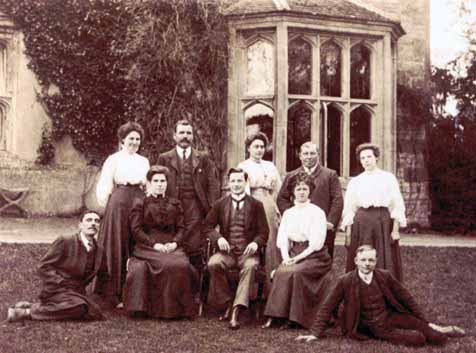 Henry’s father William Tankerville Chamberlayne died in 1905 and is buried in Southam. As eldest son Henry inherited the estate. He did not take up residency at Stoneythorpe but lived at Harbury Fields, Harbury in a fourteen-room residence which was probably easier to manage than the rambling forty-eight-room Stoneythorpe Hall. He is thought to be pictured centre here with the servants of Stoneythorpe in about 1905/6 probably after his father’s death. His mother, the staunch widow Mrs Evelyn Chamberlayne, lived on at the Hall until her death in 1931. Henry also inherited connections with Stains Hall, Willingale Doe, in Essex where, in 1911, he was registered to vote.

There was tragedy in Henry and Blanche’s life when fourteen-year-old Colin their eldest child was found hanging in his bedroom at home in Priors Hardwick. At the time it was thought possible that Colin was playing pranks; death by misadventure was the verdict of the inquest. Colin’s funeral at Priors Marston was an elaborate occasion with loving messages and floral tributes from family and friends.

In WWI Captain H F Chamberlayne served in the Household Cavalry in the Remount Service. As an experienced professional in the equine world his talents would not have been wasted. He was granted the British and Victory Medals.

His mother died in 1931 and Stoneythorpe never regained the economic and social status of previous centuries, a family history that dated back to the Norman Conquest. Henry continued in the traditional role as Magistrate, sitting in judgement on the ills, misdemeanours and petty squabbles of Southam folk but he was in residence elsewhere. At the time of his death in 1955 he was living at Steeple Aston.