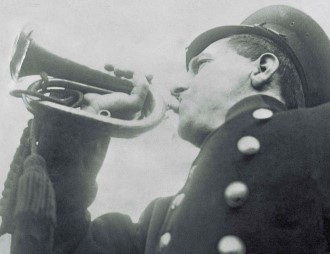 Son of Jonathon Cardall landlord of the Bull, J.F.Cardall (b 1900) enlisted on 19th December 1917 and was given light clerical duties. He was called up to RWR on 24th June 1918 and transferred to the reserve of Royal 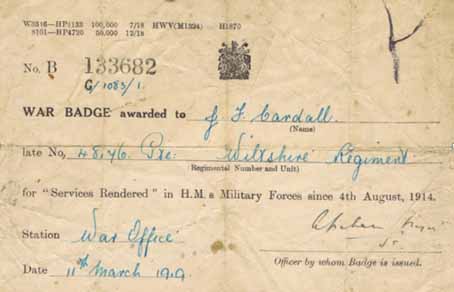 Wilts the following day. Within two months he was shipped to Dublin to be examined by T.M.B. There he was found to have ‘degeneration of muscles’ affected by infantile paralysis as a child – he had been hospitalized for three months aged about 12 years with the disease. His left leg was ‘wasted’ and he used a stick.

He was discharged in September 1918 and awarded a Silver Badge (B133682) and the surviving notification confirms this. In civilian uniform he was later foreman of the volunteer fire brigade and the last to serve as bugler. 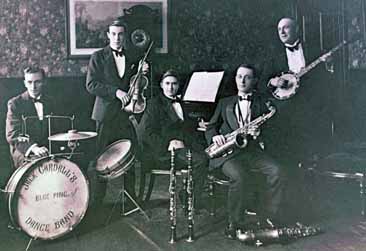 After the WWI, Jack worked as a reporter, coal merchant, publican and taxi-proprietor and became well-known in the town as a dance-band leader – his Blue Ping Dance Band was fashionably the ‘thing’ for wedding receptions in the 30s.  He began a collection of historical artefacts and this grew alongside his writing on local historical subjects. Jack is honoured still as the founder of the ‘Cardall Collection’ which is now in the care of Southam Heritage Collection.

Jack Cardall married twice, first to Winifred in 1939 who died in 1956. He was married again in 1963 to a younger woman Irene Luhmann (known as Rene) who is fondly remembered for maintaining and providing public access to the Cardall Collection.

Jack Cardall – truly a renaissance man with a range of interests – died in 1976 and is buried in Southam Church yard. He is survived by a son Robert and daughter Jacky.