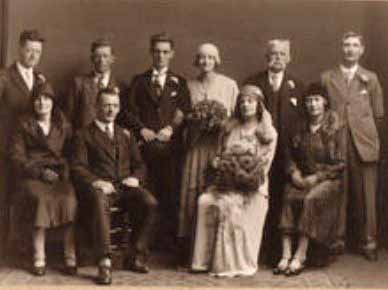 Omer Edward was born in Southam 1882 second son of Omer and Harriet Burnell.  According to Bill Burnell, in 1903 he married Edith Emily Ball of Overseal, Hampton in Arden and the couple had two children. On the wedding picture Omer (senior) the postman and fireman is second from the right.[1]

Sadly Edith died in 1911 leaving Omer with two young children. He was married a second time in 1916 to Lucy, who was three years his senior. She would have been left in charge of the children when, at the age of 35 years, he was conscripted into the Royal Marines.  He served in the Royal Marines Light Infantry (2576/8) and left with a good record.

The family lived at 84 Anglesey Road, Burton-on-Trent and the 1939 survey shows that  living with  Omer and Lucy was a thirty-one year old daughter Lily, described as ‘crippled never worked’. This young woman was presumably a daughter of Lucy and step-daughter of Omer.

[1] Thanks to Bill Burnell for the photograph and details of Omer’s retirement.