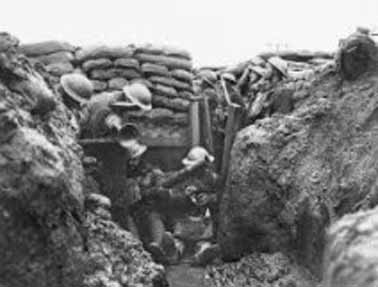 Frank Bleloch, whose elder brother William was killed on the first day of the Somme in 1916, had a traumatic war but survived. On 24th May 1918 the Leamington Courier reported that he was a prisoner in Germany. He was captured on 21st March 1918 at the time when Germany was making its very effective spring push. His military records gave his address as 7 Comp Gefangenenlager, Chennitz.

Born in 1897 he worked on his father’s farm and he was 18 years old when in December 1915 he went to war.  He served with the Lancashire Fusiliers. Autumn 1917 saw him in Birmingham War Hospital for 43 days with an extended, and presumably very serious, bout of influenza.

From others for example, George Shorthouse, we learn of the horrors of prison camp but no records have emerged from Frank Bleloch.

He was demobbed in August 1919 and in 1929 he married Marjorie A. Campion. Eventually he took over Hill Farm, Bascote.

This photograph, not specifically of Frank, shows the Lancashire Fusiliers sorting out their armaments in the trenches. It is a typical scene he would have remembered all his life.